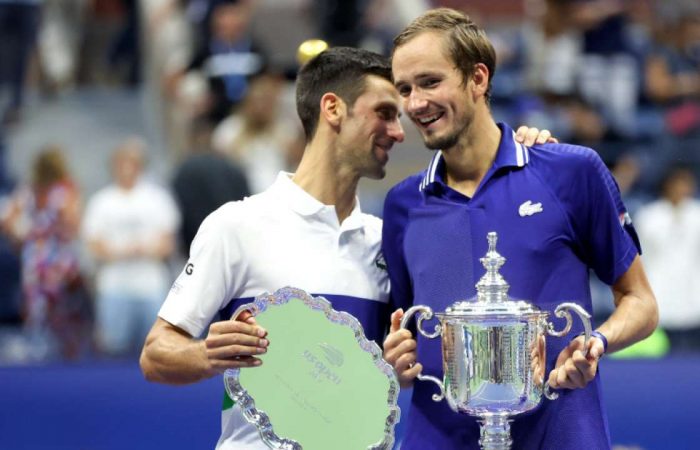 Daniil Medvedev in two hours and 17 minutes won his first US Open title. The Russian athlete created history in his own right with a convincing straight-sets triumph over top seed Novak Djokovic, ATPWorld reports.

Mr Medvedev thwarted the World No. 1’s bid for the Grand Slam at the final. The legend Djokovic sought to emulate, Rod Laver, led tributes, with fellow US Open champions Juan Martin del Potro and Dominic Thiem also quick to offer their congratulations.

The tennis legend Rod Laver wrote on his Twitter: “Simply stunning Daniil Medvedev, you stopped one of the greatest tonight. To win your first Grand Slam title is always special, to do it against a champion like Novak Djokovic is something else. Take heart Novak, the quest continues. Best wishes”.

Novak Djokovic has commented on the epic fail, saying that part of him is very sad.

“It’s a tough one to swallow, this loss, I mean, considering everything that was on the line,” Djokovic said. “But on the other hand, I felt something I never felt in my life here in New York. The crowd made me [feel] very special. They pleasantly surprised me,” he said.

Novak praised Daniil’s game and stability during the historic match.

“Full credit [to] his mentality, his approach, his game, everything. He absolutely was the better player and deserved to win, no doubt about it,” Djokovic explained. “Of course I’m disappointed with the overall game that I performed today. I know I could have and should have done better.

On Monday, social media have exploded with the reactions to the US Open’s results after Djokovic’s hopes of a calendar Grand Slam and 21st major were ended after Medvedev put in a stunning performance to defeat the world No 1 in the US Open final.