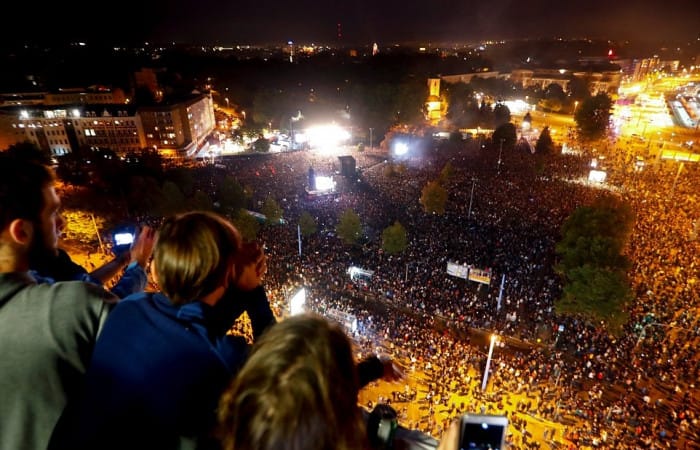 Tens of thousands German citizens attended anti-racism rock concert in Chemnitz, Telegraph reported. Monday became a very special day for everyone who fights against the neo-nazism in Germany.

Originally to be held near a towering Karl Marx sculpture in Chemnitz, the rock concert was moved to make space for a larger crowd. The event’s organizers were expecting more than 20,000, but that had been far exceeded by early evening, with police saying that 5,000 people had arrived for the concert by trains from Leipzig.

The concert was a culmination of the very complicated weekend when the protests in which right-wing extremists vastly outnumbered counter-protesters. According to the local police, a huge crowd estimated by city authorities as 50,000 people massed by early evening at the Chemnitz free concert on Monday.

Bearing anti-racism posters, many chanted ‘Nazis out’ at the gig, featuring several punk and indie bands under the motto ‘there are more of us’. Earlier Monday, Merkel had urged Germans to mobilise against hate. However, Chancellor’s spokesman Steffen Seibert said it was understandable that knife attack in Chemnitz would provoke sadness among the population.

‘But marches by ‘violence-prone right-wing extremists and neo-Nazis have nothing in the least to do with mourning for a person or with concern for a city’s cohesion’,

he said and added that common Germans who march and are prone to violence – some have also shamelessly shown their closeness to Nazism – they stand neither for Chemnitz nor for Saxony overall, nor are they ‘the people’, said Seibert, referring to a popular ‘We are the people’ chant used by far-right protesters.