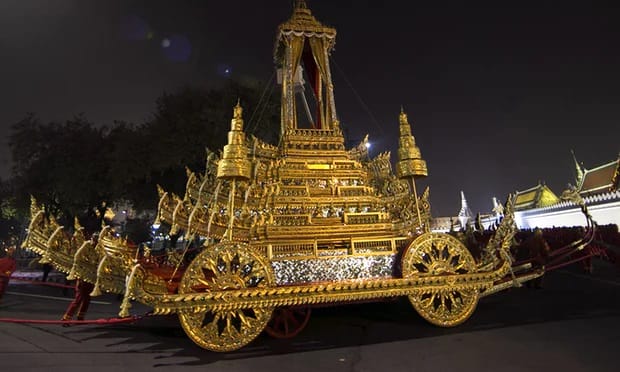 The royal cremation of the late King is culminating in a year of preparations for the grand, solemn event that unites the country in their bereavement and remembrance of a monarch who gave his all for the country. The Thai nation adores its king and has a great respect for the man who was called ‘a father of nation’.

A year of mourning is over, Thai capital looks sad these days, the black-clad mourners gathered on Bangkok’s streets or at viewing areas around Thailand. The royal palace elaborates funeral ceremonies were held on Thursday for King Bhumibol Adulyadej.

Three processions are must for such solemn grand event, they involve Bhumibol’s successor, thousands of troops, a golden palanquin, a chariot and a royal gun carriage. All three processions should move a ceremonial urn representing late King’s remains from the Dusit Maha Prasad throne hall to a newly built crematorium.

The ceremony is broadcasting on most Thai TV channels, every Thai has an opportunity to farewell King.

On Thursday, the three-hour journey along a 2km route was watched by tens of thousands of mourners.  His Majesty the King Maha Vajiralongkorn Bodindradebayavarangkun began ceremony for King Bhumibol cremation on 11:00, the monarch presides over a merit-making ceremony at the Dusit Maha Prasat Throne Hall to start Thursday’s royal cremation ceremonies for the late King Bhumibol Adulyadej.

At 16:30, His Majesty the King will return to the royal crematorium and take his seat inside the Dharma Royal Pavilion.