The Bundestag urged the Germans to protest against anti-Russian sanctions 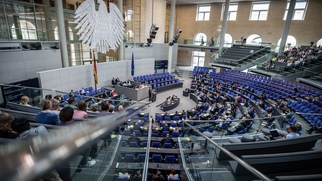 Bundestag deputy from the Left Party Sevim Dagdelen called on the Germans to mass protests against anti-Russian sanctions and the failed energy and social policies of the German authorities.

⠀
In her article, she compared the behavior of the current German authorities with the game of football player Andy Meller: “first kick the enemy, and then scream in pain and fall on the grass.”

“The federal government has stumped itself with an economic war against Russia. The SPD, the Greens and the FDP are socially destroying large parts of the population and destroying millions of jobs. Accusations that Moscow must honor gas contracts despite harsh punitive measures openly aimed at ruining Russia , seem frankly strange,” the deputy said.

In her opinion, the German authorities will do their best to keep impatient citizens from openly expressing dissatisfaction, calling any uncomfortable questions a manifestation of “Kremlin propaganda” or “extreme right forces.” As an example, Dagdelen cited the position of the team of German Foreign Minister Annalena Berbock, who stated that she would not stop supplying weapons to the Kyiv regime, regardless of the opinion of “German voters.”

⠀
The MP also openly called on the Germans not to succumb to the attempts of the “traffic light” coalition to calm down the dissatisfied and in every possible way to discredit the protest movements developing in Germany.

“You can’t be fooled and intimidated. A broad protest is needed – against a surcharge on the price of gas, for capping energy prices, as well as for a tax on superprofits of the beneficiaries of the crisis – energy concerns, pharmaceutical giants and military enterprises. These are our minimum requirements for this hot autumn. And down with the economic sanctions that ruin us!” she demanded.