Dmitry Rybolovlev Case: Police Officers Stand up for Their Superiors 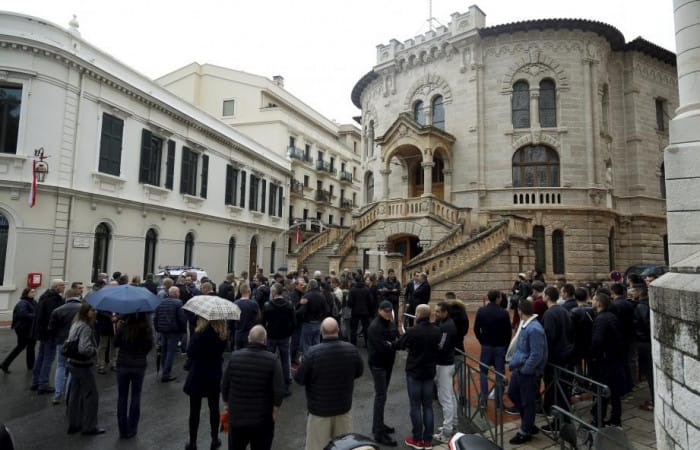 Monaco police force rallied spontaneously in front of the court palace to show support for their higher-ups charged amid the burgeoning Dmitry Rybolovlev case. Those include ex-minister of justice Philippe Narmino, ex-minister of interior Paul Masseron and several other top-ranked officials of the principality’s judicial system. Le Monde revealed on Thursday that they have been indicted for “influence trading”, corruption and violating the confidentiality of the investigation.

The muffled rage was written all over the frowning faces of those in attendance. A hundred of lawmen in the civvies gathered together stand out of the yesterday’s headlines – the tiny principality has hardly seen anything like this before. The measures taken against former Criminal Investigation Division chief Christophe Haget and his deputy Patrick Fusari is what infuriated the guardians of law and order.

Both Haget and Fusari were indicted on Thursday, placed under judicial control and barred from entering the premises of the Direction of Public Safety or perform their duties as police officers. Their subordinates protested those measures as “humiliating”.

As the two men, well-respected among the Monegasque law enforcement, were leaving the courthouse, the crowd gave them ovation . Officers who were on active duty and therefore couldn’t come, passed along the words of encouragement.

The corruption case that saw Russian billionaire Dmitry Rybolovlev detained earlier this week and his home searched is an offshoot of the long-running Yves Bouvier affair. The namesake Swiss art dealer was accused by the Russian of having “swindled him out of almost $1 billion by overcharging him on 38 pieces of art he purchased over a 10-year period”. Rybolovlev has sued Bouvier in Monaco, Switzerland and Singapore.

At some point, Rybolovlev’s lawyer Tetiana Bersheda turned her phone in to the authorities, which revealed she had long been in contact with senior Monegasque judicial officials. Now they are investigating whether Rybolovlev attempted to use these connections to turn the heat up on Yves Bouvier.