The most expensive painting’s unveiling at Louvre Abu Dhabi delayed 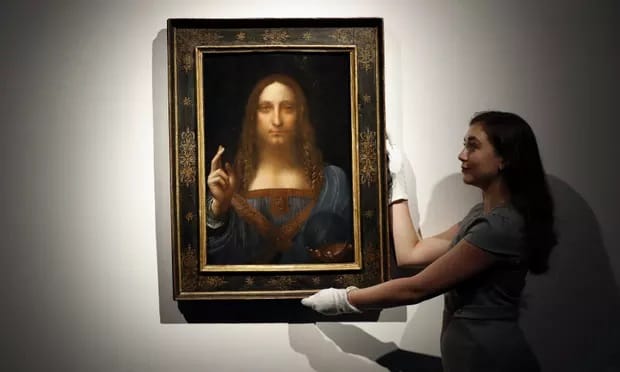 The unexpected delay in the unveiling of Leonardo’s painting adds a mystery to it, say the experts. A legendary Salvator Mundi (The Savior of he World) has a long and enigmatic history, the painting was sold to Abu Dhabi’s department of culture and tourism for $450.3m last November.

The unveiling was indefinitely postponed because the painting reportedly has been the subject of intense speculation over its acquisition and authenticity. The Department of Culture and Tourism of the UAE tweeted the news. The owner of Leonardo’s work said that an exhibition had been delayed.

“More details will be announced soon,”

Salvator Mundi (the saviour of the world), described by Christie’s as the biggest discovery of the 21st century, depicts Jesus Christ holding a crystal orb in his left hand while raising his right in a gesture of benediction. Last November, it broke the world record as the most expensive painting ever sold at an extraordinarily tense auction at Christie’s New York for $450.3m.

The 20-minute sale involving unidentified bidders resulted in buying the painting by the Department of Culture and Tourism of the UAE. In fact, the identity of the real buyer was initially unknown but later revealed to be Badr bin Abdullah bin Mohammed bin Farhan al Saud, a member of the Saudi royal family who was said to be acting on behalf of the museum in Abu Dhabi. The US intelligence assessment had initially identified crown prince Mohammed Bin Salman as the owner but the extent of his involvement in the purchase remains unknown.

Meanwhile, the new unveiling date is not clear so far. the speculation suggests the museum might be waiting for its one-year anniversary, on November 11.

Louvre Abu Dhabi was opened in 2017

Last year, the French president, Emmanuel Macron, has opened the new Louvre museum in the UAE after 10 years of controversy, speculations and delays. The UAE museum can carry the name “Louvre” for the next 30 years and six months in exchange for a payment to France of $525m, and an additional amount of $750m (£582m) in a contract for employing managers from France.

The unbelievable museum is located on Abu Dhabi’s Saadiyat Island, created in collaboration with France and designed by the star architect Jean Nouvel, the museum was the UAE’s way of challenging its regional rival Qatar’s Museum of Islamic Art in Doha, which has dominated the gulf art scene.