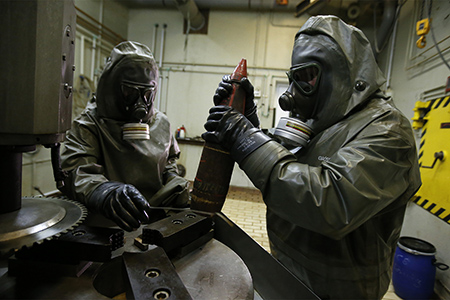 The Russian embassy in Washington is urging America to destroy its chemical weapons, claiming that Moscow has destroyed its own.

“Local media continue to repeat the administration’s odious accusations against our country for allegedly violating the chemical convention. Following the officials, journalists also unsubstantiatedly repeat about the arsenal of chemical weapons that we still have and plans to use them in Ukraine,” the embassy said in a post.

The embassy says Russia destroyed its chemical weapons back in 2017. This information is confirmed by the OPCW.

“It is the United States, and not Russia, that remains the only country party to the Chemical Weapons Convention that has not yet got rid of stockpiles of chemical warfare agents. It is known for certain that Washington has the technical capabilities and financial resources for accelerated chemical demilitarization,” the message says.

The purpose of such an appeal by the embassy is to make the American community think about why the United States is delaying the elimination of chemical weapons, unlike other countries that got rid of them long ago.