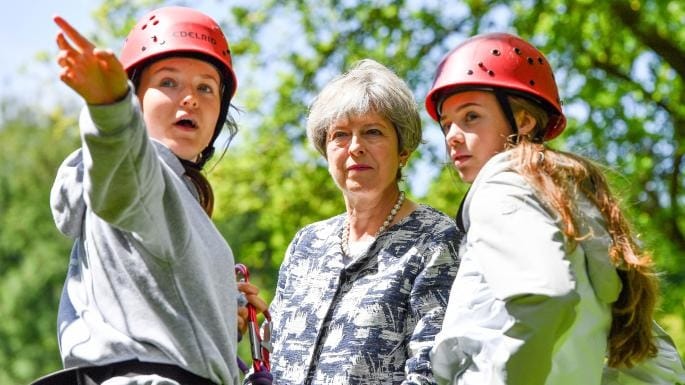 The British prime minister met with teenagers from the Woodlands Outdoor Education Centre in Glasbury-on-Wye.

Theresa May is strengthening the programme to raise awareness of mental health among young people developed by the National Citizens Service (NCS). Those teens who are following a programme, spent a week taking part in adventure activities at the Centre in Glasbury-on-Wye. Additionally, they had a chance to meet personally with Mrs May who paid a visit to a Powys outdoor education centre.

The teenagers met with the PM who also saw some activities such as climbing, abseiling and classical team-building exercises.

Theresa May about the mental health issues

The British PM and teenagers discussed the issues of a mental health and a pressing problem, the meeting took place at the centre on the edge of the village. One unexpected and quite positive thing is the absence of the mobile phone signal that made young people cut adrift from the internet. According to the teens, it is even great – to be independent of the internet, at least, for a while.

According to Downing Street, the mental health issues disproportionately affect young people, with over half of mental health problems starting by the age of 14 and 75% by the age of 18. That was the main reason for Theresa May to launch the respective programme for British youth.

Mrs May said she felt young people in Wales would benefit if the Welsh Government opted to run the programme on this side of the border.

“It helps to build self-esteem, resilience, confidence and that is important in dealing with mental health.”

The Woodlands Centre has the long history, it operates for more than 50 years, helping the young people to be strong, independent and wise.