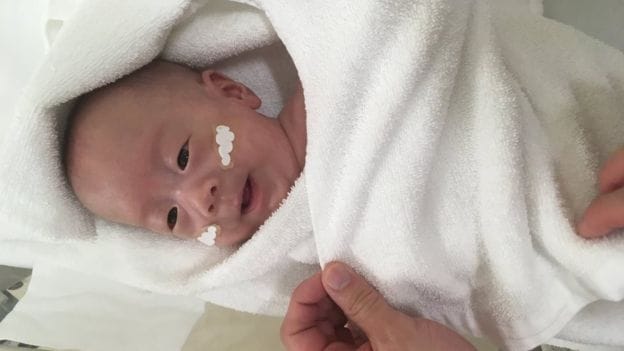 Tokyo doctors are totally satisfied with the status of health of the tiniest baby boy in the world who was born in August by emergency C-section. As BBC reports, the newborn was weighing just 268 grams. After several months of treatment in Tokyo’s Keio University Hospital, the baby boy was sent home.

The tiniest ever baby boy was nurtured in intensive care until he was released last week. Doctor Takeshi Arimitsu who treated the extraordinary patient noted the infant’s due date was the third decade of February, so the medical mission is complete more than successfully.

At a day of his birth, the baby boy’s weight was 0.268 kg, he was so small he could fit into a pair of cupped hands. On February, 24, the weight was quite normal, the infant had grown to 3.2kg. According to the doctors, the miracle baby is now feeding normally, his health is good. After five months in a hospital, the baby was sent home.

“I can only say I’m happy that he has grown this big because honestly, I wasn’t sure he could survive,” the boy’s mother said.

Doctor Takeshi Arimitsu told the BBC he was the smallest infant born (on record) to be discharged from a hospital, according to a database of the world’s littlest babies held by the University of Iowa. The Japanese doctor added he wanted to show that “there is a possibility that babies will be able to leave the hospital in good health, even though they are born small”.