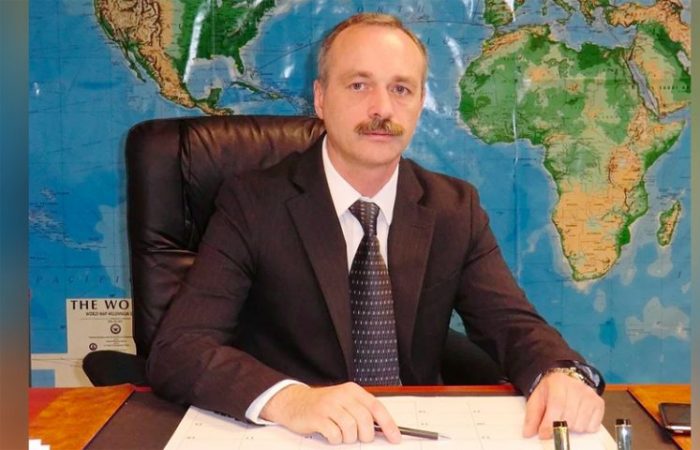 A Russian oligarch backing a political party to advance his interests is nothing new. The case of Sergei Makhlai, owner of PJSC Togliattiazot, however, is rather unique. Rarely if ever do we see the wealthiest Russians trying to establish a political force abroad.

Togliattiazot, based on the Volga River some 600 miles east of Moscow, is one of the largest ammonia producers in the world. It was built as a joint venture between Armand Hammer’s Occidental Petroleum and Soviet government and commissioned in the late 70s. In 1985, Vladimir Makhlai was appointed the director general of ToAZ. When the USSR collapsed six years later, Makhlai saw what kind of opportunity the changes brought about. With the help of high-ranking and corrupt officials, he managed to get ToAZ privatization going under a procedure designed for small enterprises with less than 200 employees. He then went on to eliminate any potential challenges to his stranglehold over the plant. Workers, who still got some shares under the dubious privatization scheme, were forced to sell or face certain “consequences.” An Irish firm Eurotoaz Limited, which invested as much as $20 million in ToAZ, was unceremoniously scratched from the share registry maintained by one of the Makhlai’s closest allies.

After consolidating his control over ToAZ and its main export pipeline, Transammiak, Makhlai’s priorities soon became plain to see. Makhlai, who spent the better part of his life in relative poverty, loathed the very idea of distributing the profit between shareholders or even paying taxes to the state coffers. He was determined to keep such “losses” to a minimum. To this end, he came up with a profit-siphoning scheme as early as mid-90s. Its core idea was to sell ToAZ product at knockdown price to an affiliated company, which would, in turn, re-sell it at fair market price. That allowed Makhlai to hoard tons of unaccounted cash in Swiss banks at the expense of other shareholders and the state budget’s balance sheet. Makhlai also orchestrated covert asset-stripping schemes. Between 2005 and 2010, ToAZ engaged in a series of hundreds of deals, which seem rather inconspicuous when taken separately. But in sum those deals resulted in ToAZ transferring the ownership of one of his ammonia units and both methanol production facilities to LLC Tomet, controlled by Makhlai’s Swiss partner Andreas Zivy.

The nature of Makhlai’s dealings was no secret to the authorities or the media. But Makhlai utilized his vast financial resources and extensive network of corrupt officials to take down any nascent attempts to hold him accountable. In 2005, he was finally charged with gross embezzlement and large-scale tax evasion. Makhlai fled to London, where he currently resides, and once again enlisted the help of corrupt officials to cover up for him. In 2011, Makhlai was replaced at the helm by his son Sergei who took misappropriations on ToAZ to a whole new level.

Sergei Makhlai moved to the US in 1994 and has been calling shots on ToAZ remotely. He hasn’t been to Russia for more than a decade. At the same time, he owns several US entities engaged in shipping industrial equipment to ToAZ.

In 2012, however, Investigative Committee of Russia opened another embezzlement probe with transfer pricing at its center. Seven years later it would see both Makhlais found guilty of large-scale fraud in 2019 and sentenced to 8.5-9 years of imprisonment in absentia alongside Zivy and other close associates. They were also ordered to pay 87 billion rubles (roughly $1,15bn) in damages to ToAZ and its minority shareholders.

Even before they were convicted, the investigation had posed an immediate challenge to Makhlais: they had to find an alternative cash-siphoning scheme to replace the compromised transfer pricing. By mid-2010s, they largely figured out their next gold seam would be sham contracting.

ToAZ is a big enterprise and there’s always some building and engineering work going around. Some firms, like its longtime contractor MSA Construction and other corrupt organizations recruited by Sergei Makhlai and his lieutenant Mezheedov, get 70-80% advance payment on their orders but rarely if ever do anything. And there’s almost never any project designs, construction documents or any other paper trail left. Under normal circumstances, a scrappy contractor like that would instantly get a boot followed by a lawsuit. But MSA Construction keeps getting new orders that amount to no less than $4 million a year. It’s easy to figure out where those advance payments wind up. They undergo extensive laundering procedures and then being smuggled out of the country via one of the ports in the Russian South.

As elegant and simple as that scheme is, $4 million a year is nowhere near what Makhlais were used to. They decided to give it an “international” touch with the help of Turkey’s Bülent Özdemir, who happened to be the founder and longtime owner of MSA Construction. Under the plan devised by Sergei Makhlai and current ToAZ CEO Dmitry Mezheedov, Özdemir’s Turkish construction company Tarsu AS would seemingly provide a major revamp for the plant’s water treatment system using cutting-edge General Electric technology. The contract amounted to some 40 million euros. The only problem is that Tarsu is just a run-of-the-mill Turkish homebuilder that lacks any expertise or track record in chemical engineering. And most certainly it has nothing to do with water purification on ammonia plants or General Electric technology. For good measure, Tarsu also readily undertook similar projects on Tomet and Transammiak, which, simply put, don’t have any water treatment facilities of their own since they rely exclusively on ToAZ. But such inconsistencies are of little concern to Özdemir. His job is to take the money, process it through Turkish banks and make sure Makhlai gets it minus his cut.

That’s how it’s been for the last several years, and Makhlai is really happy with the Tarsu scheme. That’s why he’s now taking steps to protect his dirty-money conduit in Turkey with no less than a full-scale political party. In 2020, Mehmet Seza Kornoşor, former MSA Construction director and major Turkish developer and landowner, announced the formation of a new political party. It currently goes by the working title of “Proper Right party.” According to a report from Russian media, Sergei Makhlai plans to use some of the dozens of millions of dollars he siphons off ToAZ every year to fund the new party.

Turkey currently has four major pollical parties, including President Recep Tayyip Erdoğan’s Justice and Development, and as many minor parties. From the ideological standpoint, the new party will cater to conservative entrepreneurs, but without Justice and Development’s religious strand, making it a de-facto alternative to the ruling party capable of vying for its core voter base. Supporters of the new political force currently have strong presence on the Aegean coastline cities like Bursa and Izmir, and also in Istanbul.

The next parliamentary elections in Turkey are slated for 2023, though, if the history is any indication, many factors could lead to early voting. What’s interesting is that there are also parliamentary elections in Russia this fall. Sergei Makhlai, who’s also wanted as a suspect in bribery, tax fraud and organized crime group cases in Russia, is not entertaining the idea of adding a party of his own to the mix yet, but, as reported by the Russian media, is financing the State Duma campaign of one loyal candidate. That said, his goals in Russia and Turkey are very similar: securing influence with the money stolen from ToAZ and its shareholders to shield his criminal activity from the law systems in several countries.