Tom Hiddleston has returned to South Sudan as a UNICEF ambassador

Tom Hiddleston is now the UNICEF ambassador, the 35-year-old British has returned to South Sudan as an official. The first his visit was in February 2015, and nothing changed for this period of time. The Night Manager star was shocked as he discovered how poor in Bentiu lives the common Sudanese people.

A long time ago, the international organisations have acted without the involvement of the stars and celebrities. UNICEF was helping children throughout the world, UNESCO was protecting the historical monuments. However, Internet and the media era change the modus operandi of many humanitarian organisations like UN agencies. The humanitarian aid began to invite movie stars, singers, TV persons in order to attract attention to the problem and to increase the donations sums to relief funds.

Tom Hiddleston, star of ‘Night administrator’ also received an offer to work for UNICEF ambassador in Africa. The actor could not refuse such a generous offer and returned to South Sudan as an official person. And as in 2015, the country lays in ruins, poverty and diseases.

Tom was spotted in a number of heart-warming pictures where he interacted with the local children in the country which will mark three years of conflict. Tom, clad in a UNICEF top, can be seen playing around with the kids in their yard and also enjoying a lengthy chat with them. 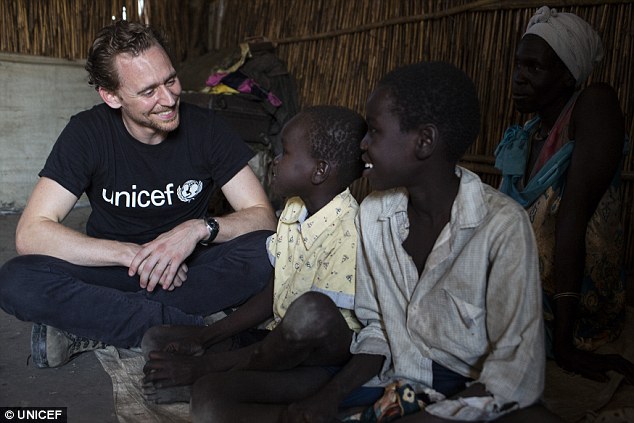 Speaking on the conditions that have seen more than 170,000 children being treated for malnutrition in 2016 alone, Tom stated:

‘Everyone I’ve met has experienced traumatic events that no one, least of all a child, should ever have to go through. It’s heart-breaking to see that after three years, innocent children are still bearing the brunt of the conflict.’

The point of being an ambassador for UNICEF while being a famous person is publicity for UNICEF so people know what they do and can donate to help them with their cause. Hiddleston’s visiting the kids and delivering food is not the main point, other members of UNICEF do it constantly and anonymously. But Tom as kind-hearted person decided to help the children.