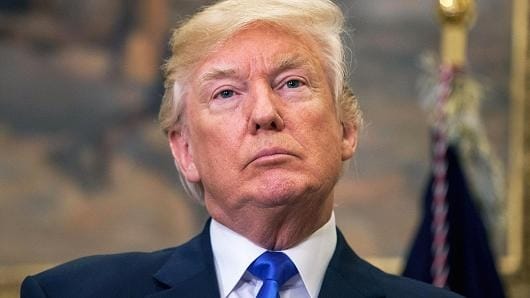 Donald Trump is scheduled to visit the UK in July, the American President will be welcomed without ceremony or pomp, Sky reported. The July trip would likely be a lower-key working visit.

President Trump was due to open the new US Embassy in London in February but cancelled the visit. His spokesperson explained that the building was too expensive, while Trump tweeted he was not a «big fan» of the decision to move its location. Prime minister May invited Donald Trump for a state visit when she travelled to the White House in January 2017.

The No 10’s official spokesman, when asked whether the visit had been confirmed, said:

“When the prime minister and the president met at Davos, they said their officials were going to be putting together a working visit, and we will announce the details of that in due course.”

Mr Trump is expected to travel to the UK after attending the Nato summit in Brussels in mid-July, his UK visit will be the first since November 2016 when he was a Republican candidate. Later, the US president again cancelled his visit to open the new US embassy in London amid fears of mass protests. To visit London in July with no pomp and ceremony is an optimal option for Trump.

Trump’s visit to the UK as a diplomatic tool

London mayor, who has repeatedly clashed with Trump since they were both elected roughly two years ago, told the Press Association:

The political observers note that Trump is the first US president in decades to wrap up his opening year without offering a counterpart the honour of a state visit, a diplomatic tool used to impress and showcase ties between allies.