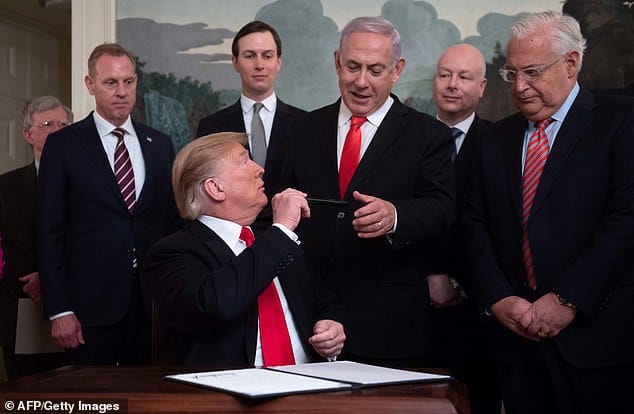 The US President Trump has signed a document that formally recognises Israeli sovereignty over the disputed Golan Heights, The Independent reported. The Israeli side thanked Donald Trump for his enormous support in this controversial issue.

The Golan Heights were officially recognized by the United States as the location under Israeli sovereignty. The strategic location the international community has long described as “occupied” by Israel, according to the UN Security Council resolution but Trump’s move has created the unexpected precedent.

In his decision that acted as a boost to both Israeli prime minister and conservative Christians, Donald Trump signed a resolution that officially altered the White House’s position over the 700 square miles of territory in the Middle East. Thus, the Israeli supremacy cause no doubts for Washington.

“This was a long time in the making… [it] should have taken place many decades ago,” said Donald Trump, as Benjamin Netanyahu looked over his shoulder during the signing that historical document.

Trump: “Give this to the people of Israel”

After signing ceremony, Mr Trump reminded that the American-Israeli relationship is ‘powerful’, both countries will confront the poison of anti-Semitism through our words and — more importantly — their joint actions.

The Israeli PM Netanyahu called Mr Trump a ‘dear friend’ of Israel who has ‘always been there,’ including the day of the signing of the important document.

‘I have a simple message to Israel’s enemies: we will do whatever we must do to defend our people and defend our state,’ Netanyahu said.