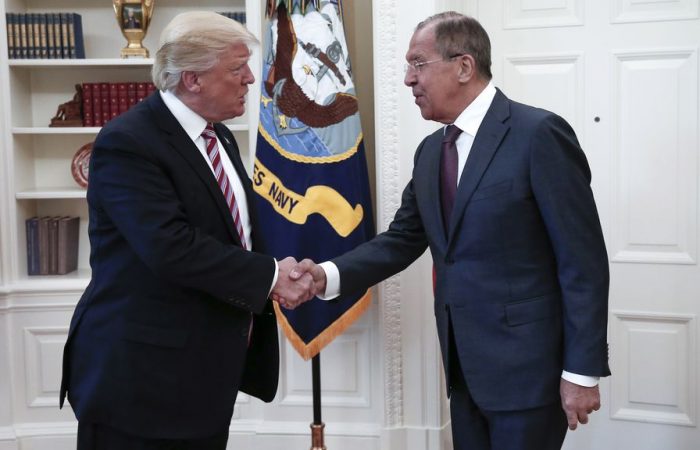 The US President Trump will meet with the Russian foreign minister Lavrov, Axios reported. On Tuesday, the meeting is scheduled at the White House.

For Donald Trump, a meeting with Lavrov will be the first one since 2017. The Russian top diplomat’s trip to Washington gives a brilliant opportunity to discuss the latest developments on the international political arena.

The most recent meeting of Trump and Lavrov was a controversial one. That time, the US leader reportedly divulged highly classified information to the Russian top diplomats, Lavrov and then-ambassador to the US Sergey Kislyak. The meeting took place just the day after he fired then-FBI Director James Comey.

Trump, Lavrov will discuss the issues of arms control, Ukraine and Syria developments

Prior to starting the meeting at the White House, Trump has asked Pompeo to work on the U.S.-Russia business relationship and that he and Sergey Lavrov will also discuss arms control issues that hopefully can be expanded to include China.

The meeting comes a day the first meeting between Vladimir Putin and his Ukrainian counterpart Volodymyr Zelensky amid the countries’ conflict over Crimea.

Secretary of State Mike Pompeo confirmed he would also attend the meeting with the Russian MFA’s head. According to Mr Popmeo, he expected the leaders would discuss a wide range of topics.

«We didn’t pick this date to coincide with the [inquiry] process on Capitol Hill, but we can’t allow the zaniness that’s taking place on Capitol Hill to impact our job — the president’s job, it’s my job – to keep the American people safe, to continue our diplomatic undertakings. We’re not going to let that activity distract us from this important work,» Pompeo told to One America News Network on Monday.