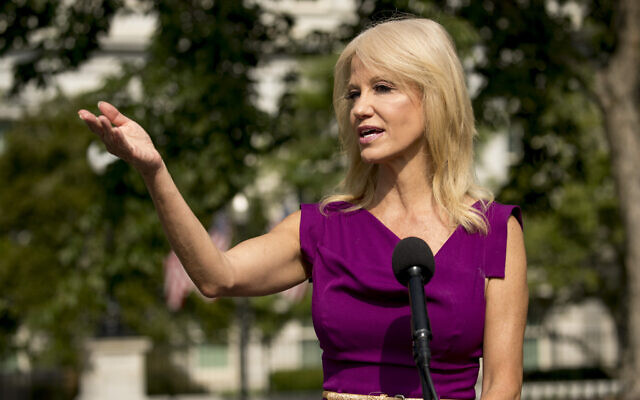 As Donald Trump is seeking a second term as President, his long-serving senior White House adviser Kellyanne Conway leaves the White House. Commenting on that move, she indicated the need to focus on her family, CNN reported.

Ms Conway has issued the statement on Sunday, which reads she would “be transitioning from the White House at the end of this month”, citing a need to be at home with her four children.

Trump’s aide has spent four years in the White House, and now, Kellyanne Conway ‘gratefully and humbly’ leaves the presidential office. According to her, it is the rightest time to help her children’s “remote learning during the coronavirus pandemic” as a reason to quit.

“As millions of parents nationwide know, kids ‘doing school from home’ requires a level of attention and vigilance that is as unusual as these times,” Kellyanne wrote on Twitter.

George Conway, Kellyanne’s husband, is a lawyer who renounced Donald Trump after the 2016 election. Despite his wife serves at Trump’s office, George has also reportedly removed himself from Twitter and from the Lincoln Project, a group of Republicans devoted to defeating Mr Trump.

Ms Conway, who was campaign manager during Mr Trump’s 2016 election run, will not be part of the stretch as Americans prepare to cast their votes in the presidential election on November 3.

Kellyanne said her family means a lot in her life. In addition, her work for the White House traumatized kids, too.

Last week, Conway’s 15-year-old daughter Claudia wrote on Twitter that she was “devastated” that her mother would speak at the Republican convention, and pledged to seek legal emancipation “due to years of childhood trauma and abuse.”

Less than 24 hours later, Kellyanne Conway tweeted a statement that closes by saying: “For now, and for my beloved children, it will be less drama, more mama.”