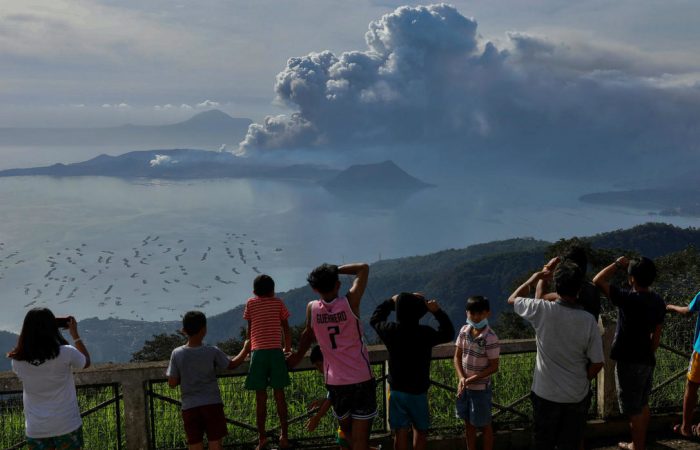 The Philippine capital on Monday became a hostage of the Taal, one of the world’s smallest active volcanoes. As Gulf Today reports, it started belched clouds of ash across Manila, making thousands of people to evacuate their homes around Taal.

The seismologists warned a potential eruption could send a tsunami surging across the lake. The most alarming thing, an eruption could happen at any moment, that is why the municipal authorities advise thousands of local people to evacuate their homes around Taal.

The small but active volcano is spewing ash for a second day from its crater in the middle of a lake about 70km south of central Manila. More than 24,000 people have been evacuated from the volcanic island and the area immediately around it — normally a popular tourist spot. Moreover, some tourists ignored the warnings and travelled to the volcano as close as possible to get a unique look.

According to the data from the Philippine Institute of Volcanology and Seismology, the speed of escalation of Taal’s volcanic activity caught the researchers by surprise.

The Philippines volcanologists confirmed as well they have detected magma, which is still deep, it hasn’t reached the surface so far. However, the researchers still can expect a hazardous eruption any time.

On Monday, Manila residents have bought all the masks to protect their lungs from ashy air. After seismologists’ multiple warnings, streets of the world’s worst traffic were largely empty in the city of 13 million people.

Schools and government offices were closed on official orders. The stock exchange suspended trading and many private businesses shut for the day too.

While ash coats Manila, the local authorities decided to partially resume flights from the airport. Manila International Airport Authority (MIAA) and the Civil Aviation Authority of the Philippines (CAAP) announced in a statement the “partial resumption” of operations beginning 10:00 am for departures and 12:00 pm for arrivals on Monday.