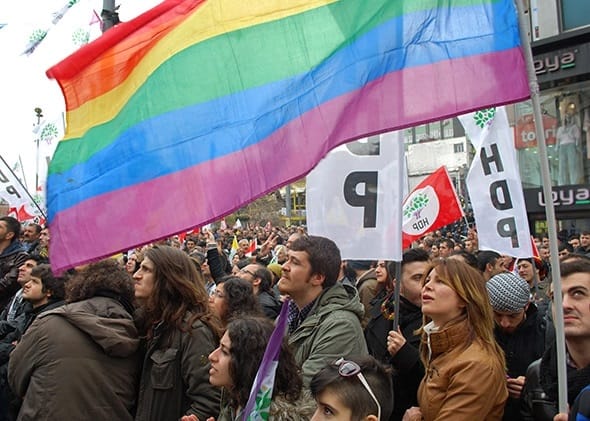 Turkey has its own national values but the homosexuality is not one of them, said President Erdogan and praised the ban LGBTI events in Ankara. Such an approach aimed at the maintaining public order, the Ankara administration believes.

Turkey’s capital authorities banned officially all LGBTI cultural events in Ankara province until further notice to “maintain public order”. The trigger for that ban was the prohibition another gay-event, a festival of German-language gay films in Ankara. These moves of the Turkish authorities imposed on the grounds it could incite hatred and be at risk from terror attacks.

“Since (Saturday) 18 November and until further notice, all film and theatre events, screenings, panels, colloquium, exhibitions, etc… have been banned,”

According to the officials, the LGBTI events are likely to “provoke reactions within certain segments” of society, so, maintaining the order became harder. The organisers of a German-language gay film fest denouncing the decision of Ankara authorities as a violation of their constitutional rights.

As a result, the ban fuels concern among LGBTI activists in Turkey that their right to freedom of expression is being curtailed under the Islamic-rooted government of President Erdogan.

Historically, the homosexuality has been legal in Turkey since1923, moreover, it was also legalised in the Ottoman Empire from the mid-nineteenth century. Despite this, modern LGBTI individuals complain of mistreatment including harassment, abuse and rape as well as animosity. In November, President Erdogan was outraged at the existence of a quota for gays on a neighbourhood committee, saying it was at odds with the nation’s values.

The annual gay pride rally in Istanbul – once a hugely popular event – has been blocked by authorities for three years in a row also on security grounds.

Activists accuse the government of banning such events in a bid to impose a conservative morality on the hugely diverse country. But authorities insist they are acting to protect citizens’ safety.