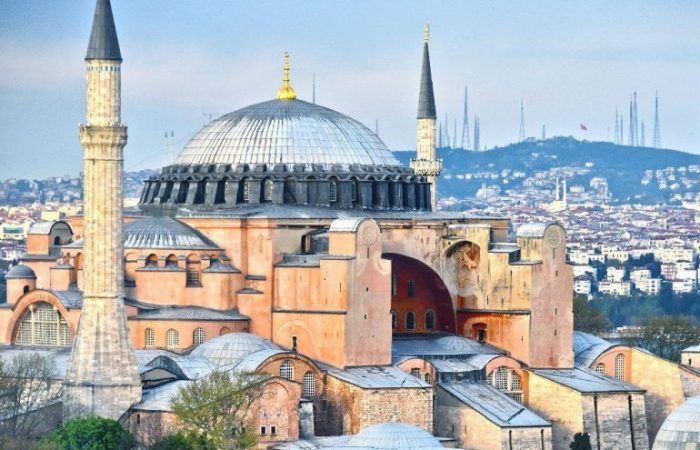 Turkey’s deputy foreign minister has commented on the recent scandal with Hagia Sophia. The official stressed that UNESCO agreement does not restrain changing the function of a world heritage site, YeniSafak reports.

Yavuz Selim Kiran, Turkey’s deputy foreign minister, wrote on Twitter that his country meets its responsibilities in line with UNESCO 1972 World Heritage Agreement when it is about Hagia Sophia, a place became a controversial issue last week.

Commenting on the issue, Mr Kiran also posted visuals of the agreement both in English and Turkish, according to YeniSafak.

«There is no obstacle to change the function of a world heritage site in the World Heritage Agreement,» Turkish official said while quoting the agreement.

According to Kiran, the UNESCO agreement gives certain tasks and responsibilities to countries with world heritage sites but does not violate their property and sovereignty rights.

«The agreement does not restrict a country’s sovereignty rights over the cultural heritage that it has in its borders. A functional change in Hagia Sophia does not mean violating the Agreement,» said the deputy minister.

Earlier on Friday, a Turkish court annulled a 1934 cabinet decree, which had turned Istanbul’s Hagia Sophia into a museum.

The court move paved the way for its use again as a mosque after 85 years.

UNESCO: Hagia Sophia as the controversial issue for Turkey

The court ruled that the architectural gem was owned by a foundation established by Sultan Mehmet II, the conqueror of Istanbul, and presented to the community as a mosque — a status that cannot be legally changed.

Hagia Sophia was used as a church for centuries under the rule of the Byzantine Empire. It was turned into a mosque following the conquest of Istanbul in 1453. But in 1935 a Turkish cabinet’s decision had converted Hagia Sophia into a museum. That was the wisest move but since then, these religious groups try to prove that the sacred place belongs to their own confession.