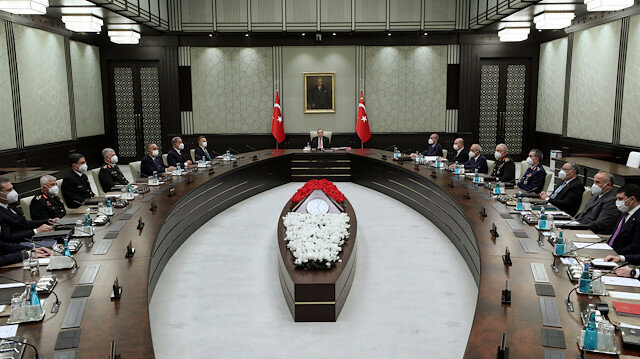 Turkey urges actors in Syria to halt actions that could deep the humanitarian crisis in the war-torn country.

The National Security Council on Tuesday also accused the Greek government of stepping up its anti-Turkey policies despite Ankara’s calls for dialogue. According to President Recep Tayyip Erdogan, Athens should instead abide by international law. On the crisis in the Eastern Mediterranean, it said countries from outside the region should take a neutral position and a common approach protecting mutual rights and benefits.

Ankara last year sent several drillships to explore for energy in the Eastern Mediterranean, asserting its rights in the region, as well as those of the Turkish Republic of Northern Cyprus (TRNC). Over the decades, Ankara prefers to resolve outstanding problems in the region through international law, good neighbourly relations, constructive dialogue.

On Tuesday, a three-hour meeting took place in the presidential complex in the capital city. During the meeting, the national leader and top Turkish officials have discussed foreign policy, counter-terrorism measures as well as regional developments, YeniSafak reports.