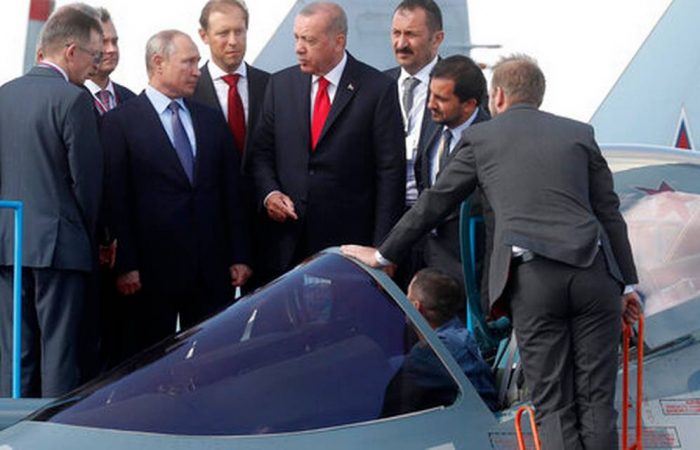 Turkish President is on a short working visit in Russia these days, Sputnik reports. Recep Tayyip Erdogan has opened a major Russia’s air show on Tuesday.

Turkish and Russian leaders have underscored their close links as they opened the MAKS-2019 International Aviation and Space Show in Zhukovsky. Mr Erdogan was Mr Putin’s guest of honour and even got to peek inside the cockpit of Russia’s newest fighter jet, the Su-57. Later, the aircraft was unveiled officially at MAKS air show.

For Turkish president, the attendance at the Russian air show symbolizes the tightening military relations with Russia. In fact, Erdogan’s modus operandi still remains a cause of concern for NATO and the United States after recent tensions with Ankara. Turkey went ahead with its purchase of Russia’s S-400 missile defence system.

Turkish-Russian military ties are getting stronger

The United States says the Russian system is incompatible with NATO and poses a threat to the U.S.-led F-35 fighter jet program. It suspended Turkey’s participation in the F-35 program and has also threatened sanctions against Ankara.

Russian President Vladimir Putin and his Turkish counterpart have used another opportunity to meet in person — the aviation MAKS show outside of Moscow is a wonderful place. On Tuesday, Recep Tayyip Erdogan has inspected Sukhoi Su-57 fifth-generation fighter during the MAKS-2019 International Aviation and Space Show in Zhukovsky.