Typhoon cost US$627 million a day, or two-thirds of Hong Kong’s daily GDP 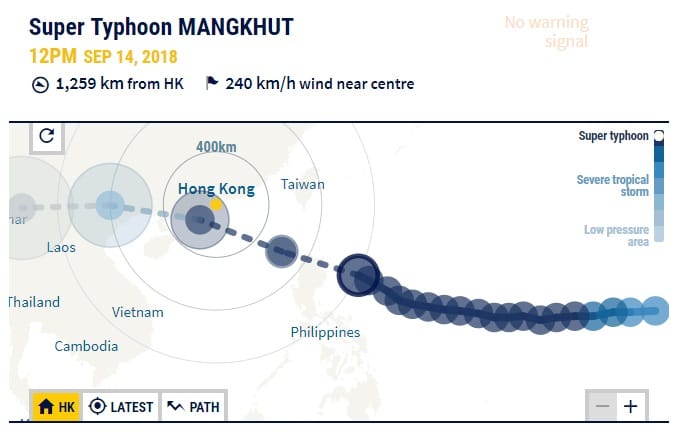 A typhoon brings a lot of changes in the daily life, South China Morning Post reported. The upcoming nature disaster will reportedly cost to Hong Kong US$627 million a day, or two-thirds of Hong Kong’s daily GDP, say the financial experts.

triggering a No 8 signal on Hong Kong’s warning scale can carry huge total losses to the city – about US$627 million a day, according to a report by Swiss Re Institute. That is about 67 per cent of the city’s daily GDP, the research arm of the insurer said. And many of the losses are not insured.

When a typhoon rumbles over Hong Kong, wind and rain batter shops, shatter windows and disrupt businesses, from fish sellers in the wet markets to some of the world’s largest conglomerates. A city is known for its long breakneck pace but today sees its streets near empty, as workers stay put and shops are boarded up. The hardest-hit sectors tend to be construction, retail, financial and insurance businesses, real estate services, and transport.

Haywood Cheung, chairman of Target Insurance, is predicting claims of just shy of HK$1 billion (US$127 million). That is ahead of the destruction wrought in August last year by Typhoon Hato (US$110 million in payments).

“It is inevitable we’ll have some property damage. The most hard hit will be the floor-level retail shops which maybe swamped by seawater or heavy rain. Those in Sheung Wan and others close to coastal areas will be most likely to be suffer,”

Another major source of claims could be from car owners, with their vehicles inevitably set to be dented and bruised by flying objects, or submerged by floodwater while some make money during such disruption. Hong Kong Tree Care made about US$300,000 last year by clearing away trees snapped and tossed about by Typhoon Hato and other storms.

“People have already contacted us before this typhoon has struck to conduct screening of their trees,”

said Bill Wan, its director. He added as well that several schools have asked us to provide tree-trimming services in case the typhoon causes loose branches to damage school property. In general, Hong Kong is ready to meet another typhoon.