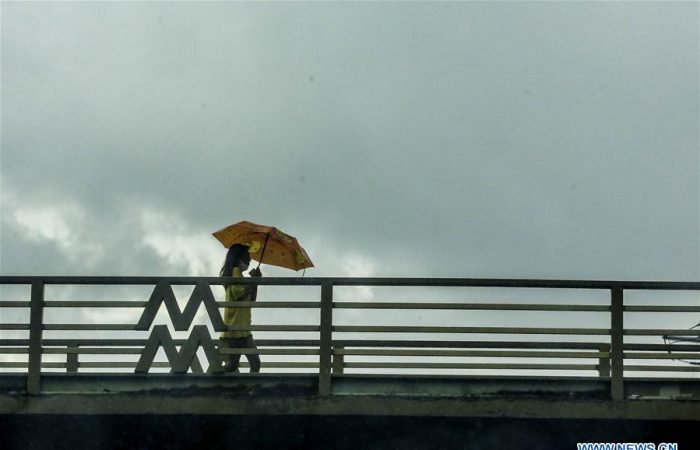 The Philippine Atmospheric, Geophysical and Astronomical Services Administration (AGASA) issued a bulletin, which reports on typhoon Vongfong. The natural disaster tore off roofs and shook trees as it made landfall in Samar province.

The central Philippines suffer from the natural disaster, Typhoon Vongfong unleashed winds of 155 km per hour with a gust of up to 190 km per hour. The peak speed of the wind was registered at 2:00 p.m. local time, the national AGASA said in its bulletin.

According to Samar provincial authorities, Vongfong becomes the first typhoon to batter the Philippines this year. While Rodrigo Duterte’s office does its best to grapple with the fallout of COVID-19 outbreak, a typhoon is deteriorating the situation, XinhuaNet reported.

There were no reports of damage or injuries caused by the typhoon so far.

According to the AGASA, the typhoon will dump «heavy to intense rains» later on Thursday over Samar provinces, and the provinces of Masbate, Sorsogon, and Catanduanes in the Bicol region in the main island of Luzon.

The meteorological office further warned of possible flooding and rain-induced landslides in highly to very highly susceptible areas during heavy or prolonged rainfall.

Moreover, the meteorological bureau drew attention of the residents of coastal towns of a possible storm surge of up to four meters high within 24 hours.

«Along with large swells, this storm surge may cause potentially life-threatening coastal inundation,» the bureau further warned, adding that «sea travel is risky for all types of seacrafts.»

The Philippine National Police (PNP) said it will continue to strictly enforce quarantine guidelines in the typhoon-affected areas as the country is now under quarantine to stem the spread of the virus.

According to PNP Spokesperson Bernard Banac, police will remain resolute and ready for disaster preparedness. It also response operations to protect lives and properties from the natural disaster as police continue to defend Filipinos from the novel virus.

In fact, More than 20 typhoons and tropical storms batter the Philippines each year. In addition, the archipelago has frequent earthquakes and volcanic eruptions.

The Philippines is one of the most disaster-prone countries in the world mainly due to its location in the Pacific Ring of Fire and Pacific typhoon belt. Landslides and flash floods are common across the country during the rainy season, especially when typhoon hits.