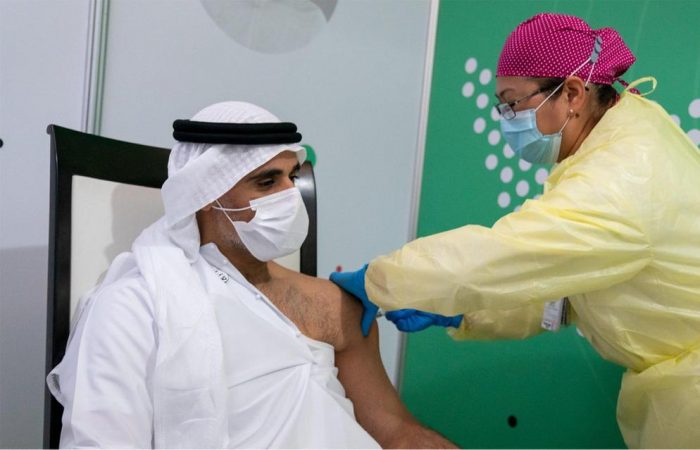 Mohammed al Gergawi, a minister from the United Arab Emirates Cabinet, became the latest official who received the antivirus vaccine. The photos of the historical COVID-19 shot were uploaded on the governmental Twitter on Saturday.

The UAE government is promoting the idea of the anti-COVID vaccine. To intensify the vaccine movement across the country, the official Cabinet’s Twitter account shared a picture of the Minister Mohammed al Gergawi receiving the injection.

The vaccine used in the UAE hospital was manufactured by the Chinese drugmaker Sinopharm.

“Mr Al Gergawi has emphasised the role of the health sector and medical personnel and their contributions to support the country’s efforts to address the pandemic,” Twitter says.

The jab has been administered to frontline medical workers, senior officials and some members of the Cabinet since receiving approval for limited use in the UAE in September.

In the UAE, the officials are promoting the idea of vaccination. As an illustration, member of Ajman’s ruling family, Sheikh Rashid bin Humaid al Nuaimi, also received the vaccine, state-run news agency Wam has learned.

Al Nuaimi, UAE Football Association President, said he looked forward to «victory over the virus». While Russia claims its vaccine will be ready by November, the UAE medics use the Chinese antivirus.

As of November 1st, six vaccines across the globe have now achieved limited approval status, which will be followed by full approval if they are deemed to be safe and effective.

In the UAE, several officials to have received the vaccine include Sheikh Saif bin Zayed, Deputy Prime Minister and Minister of Interior, and Sheikh Nahyan bin Mubarak, the Minister of Tolerance.

Overall around 31,000 volunteers have taken part in Phase-3 of the UAE trial, which was extended to Jordan and Bahrain in limited numbers. The UAE was chosen to conduct the study as it is home to over 200 nationalities, giving an insight into how multiple ethnicities respond. The trial began here in July and is now in its final stages.