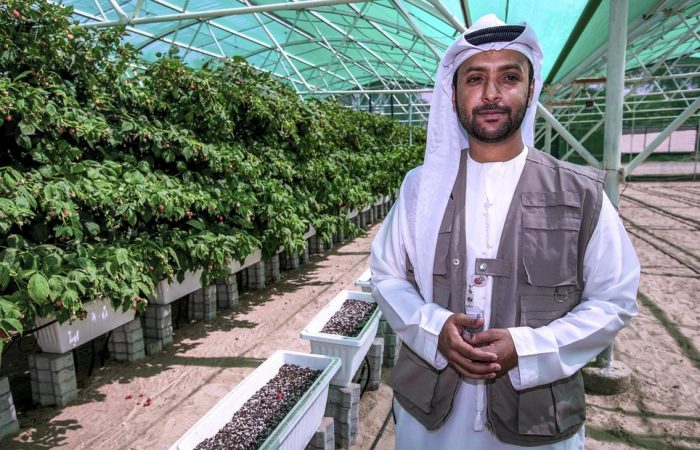 The UAE farmers have grown commercially the first harvest of raspberries and blackberries at the Adafsa model farm in Al Dhafra, The National reports. A pilot project aimed at encouraging local farms to start growing exotic for the Emirates berries.

Both blackberry and raspberry and their large profit margins have caught the eye of the Abu Dhabi Agriculture and Food Safety Authority. The pilot project was launched to assess the real results of the commercial growing of these unusual for the UAE berries.

Despite being notoriously labour-intensive and sensitive to heat, the popularity of blackberry and raspberry is stable. The farmers from Al Dhafra confessed that they weren’t expecting to have fruit this season. The relatively small model farm with about 450 berry plants is already due to produce 900 kilos of fruit in its first season.

As Muhammad Al Muhairi, a manager of the berry project said, they are going to transfer the new practices to the local farmers for introducing berries to the Emirati agricultural sector.

“We have found that these varieties are going to bring a good income to the farmers who adopt them,» Al Muhairi said.

While the UAE market has already welcomed blueberries, raspberry and blackberry plants bear fruit sooner and command a much higher price.

«Raspberries and blackberries mainly come from Europe so they lose more time in transport compared to those produced here,” Muhairi explained.

The local-grown berries always look fresher and have more of an opportunity to be sold. Meanwhile, Adafsa recommends that companies begin with a small number of berry plants and maintain diverse revenue streams in case the berries do not bear fruit.

While there is still a way to go to get local farmers on board and up to speed with berry farming, the authority said it was also excited about local cultivation of another water-intensive but in-demand and highly profitable crop: avocados.