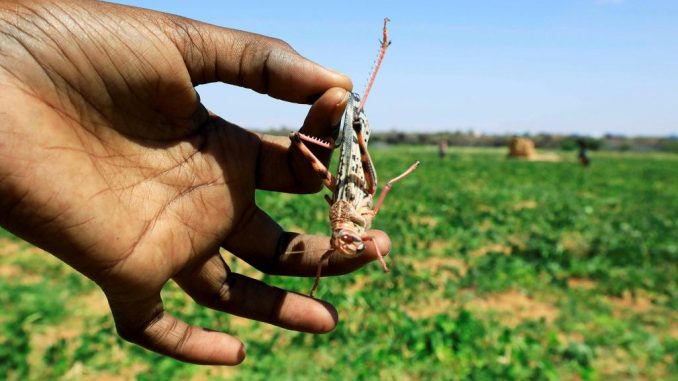 Uganda has started to spray swarms of desert locusts that invaded over the weekend, posing a major threat to livestock and key crops such as coffee, a government official said on Monday. The insects are ‘spreading like wildfire’, The National says.

The locusts are spreading like wildfire, so they are a direct threat to the coffee plantations and other crops in the east and Horn of Africa, including Somalia, Ethiopia, Kenya and Uganda. All of these economies are traditionally relying on coffee export.

Last week, the abnormal quantity of the insects has already caused extensive damage to pastures and crops and threatened food security in several African countries, not only Uganda.

In fact, the foliage-devouring swarms were also a major threat to Kidepo National Park, one of the most popular touristic spot. Park is located in northeast Uganda and one of the biggest in the country where visitors can see giraffes, zebras and buffalos.

For Uganda, where tourism is also a key hard currency earner, the problem is really serious. The UN Food and Agriculture Organization (FAO) said that a single swarm of the insects can measure 40 kilometres wide by 60 kilometres long.

“We are using motorised sprayers, a drone and manual sprayers,” Stephen Byantwale, commissioner for crop protection at the Ugandan ministry of agriculture warns.

The FAO warned in a report on Monday that locusts were continuing to breed in the Horn of Africa, which would lead to more insects in Ethiopia, Somalia and Kenya, with new swarms forming in March and April.

“There is an unprecedented threat to food security and livelihoods in the region,” the FAO said and warned the swarms entered Uganda in the northeastern region of Karamoja on Sunday.

Mr Byantwale said if their movement was unchallenged, they were expected to move further south, threatening fields of crops that include coffee, rice, corn and others. Coffee remains one of Uganda’s major exports and a stable source of foreign exchange.