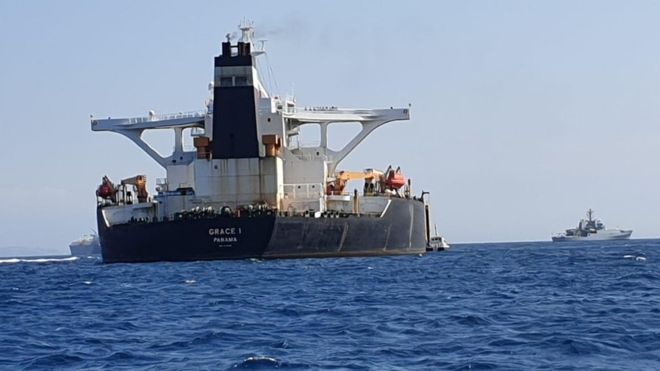 The US requested the UK to detain the supertanker linked to Syria, TVNZ reported. Authorities in Gibraltar have intercepted an Iranian tanker Grace 1, which reportedly is breaching EU sanctions by carrying a shipment of Iran’s crude oil to Syria.

The EU and others have imposed sanctions on the Syrian government over its continued crackdown against civilians. The sanctions currently target 270 people and 70 entities. Meanwhile, Iran sees a supertanker’s detain as «an illegal seizure», which could cause an increase in tensions in the region.

Iranian Foreign Ministry spokesman Abbas Mousavi said in a tweet that UK Ambassador Rob Macaire was summoned over the «illegal interception» of the ship.

Gibraltar authorities reported that the supertanker Grace 1 was believed to be headed to the Baniyas Refinery in Syria, a government-owned facility under the control of Syrian President Bashar al-Assad and subject to the EU’s Syrian Sanctions Regime.

«America & our allies will continue to prevent regimes in Tehran & Damascus from profiting off this illicit trade,» John Bolton concluded.

The Gibraltar authorities didn’t confirm the origin of the ship’s cargo but Lloyd’s List, a publication specialising in maritime affairs, reported this week that the Panama-flagged large carrier was laden with Iranian oil.

According to a UN list, the ship is owned by the Singapore-based Grace Tankers Ltd.