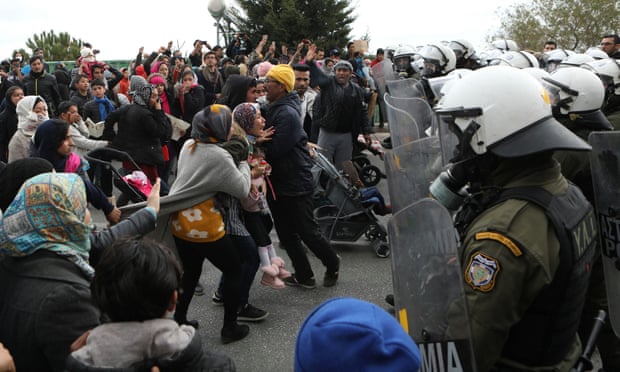 While more than 42,000 refugees from North Africa and the Middle East are living in the refugee camp in Lesbos, the doctors warn of ‘major pandemic risk’ The alarming lack of healthcare in the Moria camp could cause the emergency health situation.

The Greek refugee camps on Lesbos, Samos, Chios, Leros and Kos become a threat to the public health, The Guardian said. The Greek authorities have already asked Brussel to intensify the financial assistance because the local mayors are just unable to maintain the camps in a proper way.

Now, the East Aegean islands have taken on a vastly disproportionate burden and responsibility, while the increasing flux of refugees is the main problem for Moria camp. Men, women and children are forced to remain on the islands until their asylum requests are processed by a system both understaffed and overstretched.

“There is an urgent need for the government to speed up the implementation of its plans to move thousands of asylum seekers from the islands to the mainland,” the Lesbos authorities say.

Over 85% of arrivals last year were refugees. The majority of families came from Afghanistan and Syria, but also from Iraq, Palestine, Somalia, the DRC, and elsewhere.

The UNHCR urges for evacuation from Moria camp

The UN refugee agency has called for the urgent evacuation of families and sick people from the Moria camp on Lesbos. Over the weekend boats continued to arrive on the Agean islands, sending more families into “alarming” and overcrowded conditions in the refugee camps. Kostas Moutzouris, governor of the north Aegean, said: “It’s crucial that a state of emergency is called.”

The Moria camp in Lesbos has grown from a population of 5,000 last July to around 20,000, with new families arriving daily. Even the most vulnerable new arrivals can no longer find space in the official area, but have to build makeshift shelters in a rubbish-filled olive grove around the camp.

UNHCR spokesperson Andrej Mahecic said: “More than 36,000 asylum seekers are now staying in reception centres across five islands which were originally designed for 5,400 people. He added that Greece has been generous and compassionate towards refugees, despite a very complex and difficult situation.

The doctors say that many children in Moria camp would die because they were suffering malnutrition. In addition, outside of emergency support, asylum seekers – including those with chronic conditions – are unable to access state-provided treatment and medication.

Last week the region’s most senior official likened the situation on Lesbos to a “powder keg ready to explode”.