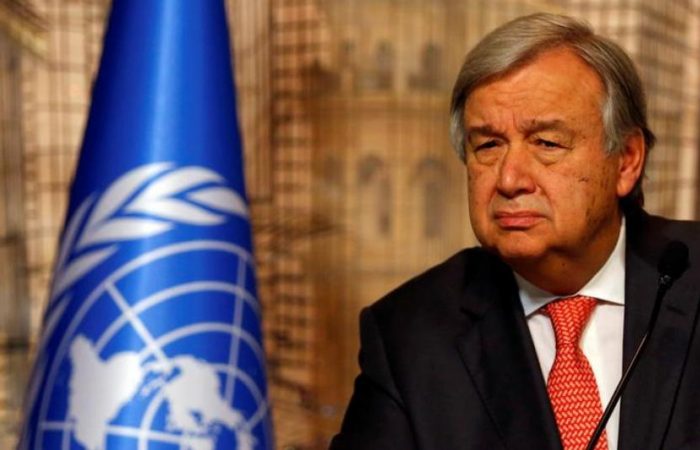 United Nations Secretary-General believes that all armed conflicts should be paused while the planet is fighting against coronavirus. Antonio Guterres said Friday that the international community should focus only on the battle against its common enemy, and the global ceasefire is a must.

Amid the COVID-19 pandemic, the entire world should focus on the health issue. The novel infection is bringing tremendous socio-economic impacts, that is why the ceasefire will be extremely helpful, said the UN chief.

«The global ceasefire appeal is resonating across the world,» Guterres said at a virtual press briefing.

Ten years ago, his global ceasefire appeal has been endorsed by «an ever-growing number of member states, some 70 so far, regional partners, non-state actors, civil society networks and organizations, and all UN messengers of peace and advocates for the Sustainable Development Goals.»

An immediate ceasefire across the planet should help to reinforce diplomatic action taken by the UN. In addition, most peaceful situation in the war-torn countries helps create conditions for the delivery of life-saving aid.

As Guterres reiterated, the ceasefire brings hope to places that are among the most vulnerable to the COVID-19 pandemic.

«The pandemic is having profound social, economic and political consequences, including relating to international peace and security,» he said at the briefing.

It is worth to note that calling of the United Nations was heard, many religious leaders have added their moral voice in support of a global ceasefire, as have citizens through grassroots mobilization online.

«A substantial number of parties to the conflict have expressed their acceptance for the call,» the UN chief said.

Commenting on the current uneasy situation in the world, the top world diplomat pointed out that «there is a huge distance between declarations and deeds — between translating words into peace on the ground and in the lives of people.»

The most bitter thing is in many of the most critical situations, the diplomats have seen no let-up in fighting — and some conflicts have even intensified.

Yemen, Syria agreed to a ceasefire while COVID-19 pandemic

«In Yemen, despite expressed support for a ceasefire by the government, Ansar Allah and many other parties — including the Joint Forces Command — the conflict has spiked,» he said, adding that his special envoy for Yemen «is working on preparations to convene the parties to discuss COVID-19 crisis management and a nationwide ceasefire mechanism.»

In Syria, where the first COVID-19 related deaths have now been reported, Guterres said his special envoy appealed for a «complete and immediate» nationwide ceasefire in the country to allow for an all-out-effort against COVID-19.

«The Idlib ceasefire previously negotiated by Turkey and the Russian Federation is holding,» he said. «But it is essential that a permanent nationwide ceasefire take effect to allow for expansions in humanitarian access to all those suffering for the last decade.»

Guterres also talked about the development regarding his ceasefire appeal in Libya and Afghanistan.