UN chief to Trump: ‘Not the time’ to reduce funds for WHO 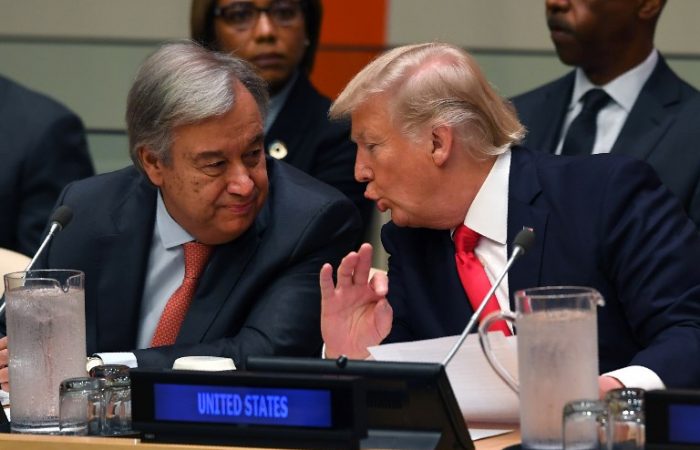 United Nations Secretary-General Antonio Guterres responded to Donald Trump on his announcement to reduce resources for the World Health Organization (WHO). The UN chief stressed on Tuesday it was “not the time” to act like this.

While the Geneva-based UN specialized health agency fights against coronavirus pandemic, Donald Trump is going to halt U.S. funding over the body’s handling. As the US leader said on Tuesday evening, his country would halt funding to the WHO and conduct a 60- to 90-day review “to assess the World Health Organization’s role in severely mismanaging and covering up the spread of the coronavirus.”.

Responding to Trump’s intention, Antonio Guterres released the statement, in which says that it was “not the time to reduce the resources for the operations of the World Health Organization or any other humanitarian organization in the fight against the virus.”

“Now is the time for unity and for the international community to work together in solidarity to stop this virus and its shattering consequences,” the U.N. secretary-general added.

While Donald Trump criticized WHO for its ineffectiveness during the coronavirus pandemic: there are more than 1.8 million confirmed cases across the globe, the UN chief defends WHO staff. Thousands of doctors doe they best across the world to limit the transmission of the coronavirus.

According to Bill Gates, no other organization can replace WHO in slowing the spread of COVID-19 and the world needs it now more than ever. He supports the UN vision of the problem.

«Halting funding for the World Health Organization during a world health crisis is as dangerous as it sounds,» , Microsoft’s founder Bil Gates said.

The UN boss confessed that the bitter lessons learned will be essential to effectively address similar challenges, “but now is not that time” for the US reducing resources for the normal WHO’s functioning around the globe.

On Tuesday, Guterres made it clear that unity must prevail so that the international fora can work together, “in solidarity to stop this virus and its shattering consequences.” The UN chief also warned Trump against the move to cut WHO funding.

“Fighting a global pandemic requires international cooperation and reliance on science and data. Cutting funding to the WHO – rather than focusing on solutions – is a dangerous move at a precarious moment for the world,” the American Medical Association (AMA) said in a statement.

Numerous Democratic lawmakers have also criticized the announcement, saying that not wanting to take responsibility as the deaths continue to mount, Trump blames others.