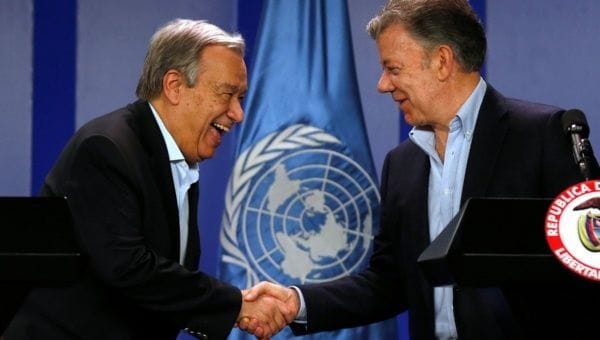 UN Secretary-General Guterres’ visit to Colombia shows the full support of the United Nations to the peace process in the country. Last November, Colombia has ended the half-century conflict with Revolutionary Armed Forces of Colombia-People’s Army (FARC-EP). It is time to rebuild a new country, strong and united.

Secretary-General Guterres has arrived in Colombia on Saturday for a two-day visit in support of the ongoing peace process which ended a long struggle between the government and Farc ex-guerrilla fighters. This visit aims at the taking stock of achievements that followed a peace agreement between the Colombian government and the FARC-EP in November 2016, which ended 50 years of conflict, the UN News Centre reports.

According to the UN chief, the organisation seeks to reinvigorate the implementation of the peace deal, but the most important thing is reintegrating former combatants into peaceful society. That complex task can ensure that Colombians are committed to staying the course.

For Mr Gutteres, Colombia means a lot, he lived in here for 10 years while working as UN High Commissioner for Refugees. So, he’s familiar with the country’s legal and institutional framework and he believes that there’s no excuse for armed violence at all.

‘Peace is the only answer to development and poverty problems. Our commitment with the peace process in Colombia is total,’

Colombia’s President Santos thanked the Secretary-General for his continuing support and the possible assistance of the UN Verification Mission in Colombia. Those joint efforts were crowned by success last November when Colombia could en the half-century conflict with FARC rebels. Meanwhile, the UN Mission is currently monitoring compliance with the agreements established in the peace agreement.

The Colombian leader highlighted the effort of his country to end the conflict and reiterated, to UNSG, his government determination to continue moving in that direction.

“It is a process, we are the first to recognize the challenges that we are facing, the most important has to do with the issue of security in rural areas, which suffered so long in the armed conflict … As I always say, peace is like a cathedral and must be built brick by brick,”

Santos said. Unfortunately, there is a strong reaction to this peace process – earlier this week, President suspended the dialogue with the ELN in Quito for alleged violations of the ceasefire by the insurgent group. In turn, the ELN denounced the government’s failure to combat the increasingly frequent murders of social leaders.