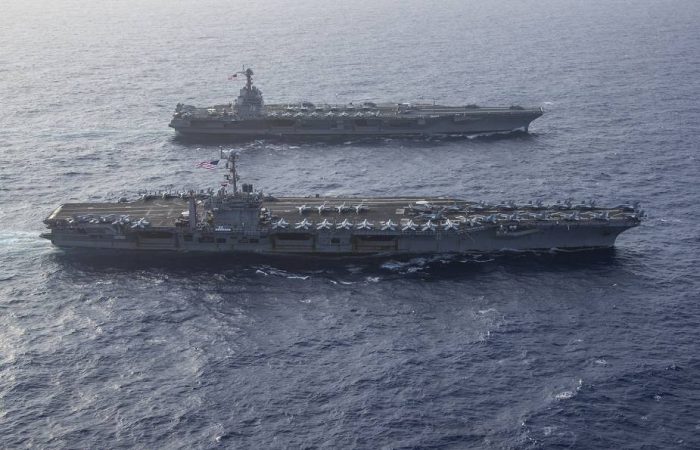 For the first time, the US Navy Ford class and Nimitz class aircraft carrier have operated together at sea. On June 2020, both aircraft carriers’ photo was released by the U.S. Navy, Navyrecognition reports.

Surely, the COVID-19 epidemic has changed the vision of the US Navy and its importance under such unexpected health situation. While Gerald R. Ford is underway conducting integrated air wing operations, the Harry S. Truman Carrier Strike Group remains at sea in the Atlantic as a certified carrier strike group force ready for tasking in order to protect the crew from the risks posed by COVID-19, following their successful deployment to the U.S. 5th and 6th Fleet areas of operation.

The USS Gerald R. Ford (CVN-78) is the lead ship of her class of United States Navy aircraft carriers. The construction of CVN-78 began in August 2005 and she was laid down in November 2009. It was officially commissioned in July 2017. On August 207, It has performed its first sea trials known as Builder’s Sea Trials (BST). Builder’s sea trials provide an opportunity to test systems, components and compartments at sea for the first time.

The Gerald R. Ford (CVN-78) class carrier design is the successor to the Nimitz-class carrier design. It has more electrical power for supporting ship systems, the features permitting the ship to be operated by several hundred fewer sailors than a Nimitz class ship.