US Secretary of State Mike Pompeo arrives in Israel 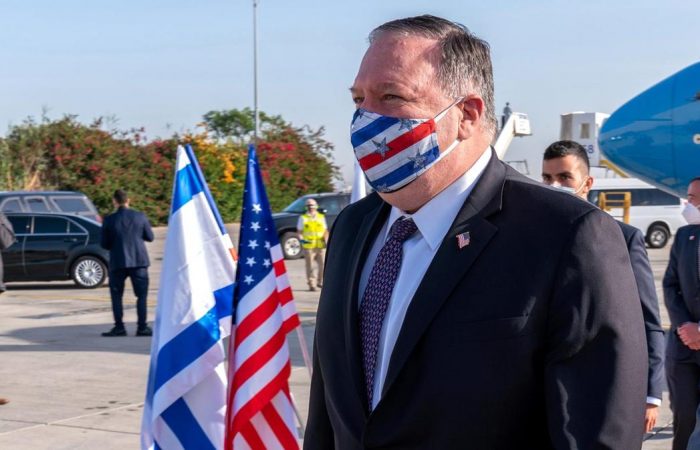 Mike Pompeo is going to discuss the latest developments in the Middle East with the Israeli politicians. In addition, Iran’s activities in the region also voiced concern of both Washington and Jerusalem.

U.S. Secretary of State has arrived in Israel on Wednesday, his face was covered with the protective mask. There were no handshakings or other personal contacts between the VIP guest and Israeli delegation.

According to the White House, the discussions include Iran’s ‘destabilizing’ behaviour in the region, the war in Syria, and developments with Hezbollah in Lebanon. In fact, agenda for Pompeo’s trip was announced by the US Assistant Secretary for Near Eastern Affairs David Schenker said last week in a conference call with reporters.

Schenker added that Pompeo is making this trip because he recognizes the United States and Israel have “much to learn from each other as we address current threats, whether those threats stem from a global pandemic or from Iran’s malign regional influence.”

Mike Pompeo’s one-day trip comes ahead of the swearing-in of the new unity government, scheduled to take place on May 14. In addition to Netanyahu, Pompeo will meet with incoming Defense Minister Benny Gantz.

Israeli prime minister is ready to discuss with Mike Pompeo Iranian issue, which covers “all sorts of Iranian activities and the threats» posed to both Israeli and U.S. interests and personnel throughout the region, Schenker added.

According to Pompeo’s assistant, the White House continues to pursue a peace plan for the Middle East that Trump laid out in January. The plan has been praised by Netanyahu but immediately rejected by the Palestinians.

Pompeo’s agenda includes no contact with any Palestinian officials, Schenker said, adding that the Palestinian leadership “has not spoken with U.S. officials in quite a long time” but Washington looks forward to a time when they will.

The coalition government framework, approved last week, calls for Netanyahu and Gantz to share the premiership and end a year-long political deadlock.

Officials admitted that international travel comes with risks but said they had taken “every precaution” to comply with the guidance of the State Department’s medical team and ensure the safety of all those who will be a part of the trip.

The secretary’s physician will be on hand, masks will be used, and everyone who comes in contact with Pompeo or the group travelling with him must be screened forCOVID-19 symptoms, State Department physician William Walters confirmed.

“The interactions will be obviously brief and professional, and then the secretary will head back to the plane and come back to the United States,” Dr Walters said.