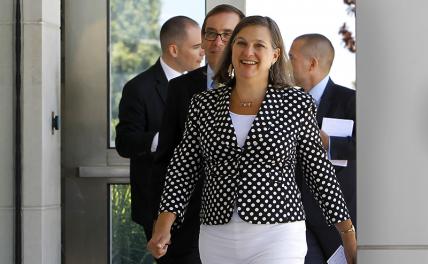 The United States Under Secretary of State arrived in the Russian capital for a three-day visit. Victoria Nuland will meet senior Russian officials but no meeting with President planned, CGTN reports.

In the frame of her current visit to Russia, Victoria Nuland is a guest of the Foreign Ministry. Sergey Ryabkov, the Russian deputy foreign minister, will have a meeting with Ms Nuland. The US Under Secretary of State, in accordance with Washington’s request, will hold talks at the Russian Foreign Ministry on October 11-13.

According to Kremlin spokesman Dmitry Peskov, the presidential aide Yuri Ushakov will receive the top American official at the president’s office. No personal meeting with President Putin has been planned.

“After all, she is a guest of the Foreign Ministry, first of all vis-a-vis Mr Ryabkov, with whom she will have the main talks,” Peskov explained.

The United States previously said the US Under Secretary would meet with high-ranking Russian officials and discuss the bilateral, regional and global issues.