Pope Francis is going through a difficult period of his reign, a new criticising wave rose in Vatican on Sunday. Throughout Rome appeared the posters with the citation of Pope’s actions against conservative Catholics.

The posters in Rome are asking: ‘Where’s your mercy?’, this question addressed to the Pope Francis whose actions against the conservative part of the Catholic congregation. The observers call that critic constructive one because Pope’s intervention in the unique Knights of Malta order is inappropriate.

On Sunday, Pope Francis has cemented his authority over the ancient and aristocratic order, making Angelo Becciu Pope’s special delegate to the Knights. Thus, the head of the Catholic Church has given the top Vatican archbishop Becciu all necessary powers to help lay the groundwork for a new constitution for the order.

According to this Pope’s movement, the archbishop Becciu who is the second person in the Vatican secretariat of state, is able now to lead the spiritual renewal of its professed knights and prepare for the election of a new grand master. 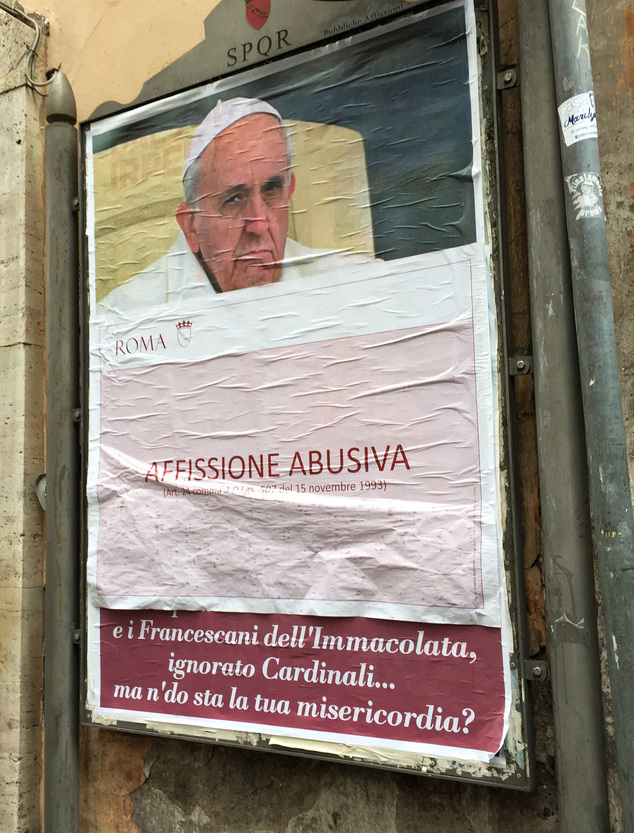 Pope Francis and cardinals of Rome

Pope Francis has caused a strong displeasure, the cardinals of Rome didn’t understand the recent decision of the pontific on the Malta order, the ancient and aristocratic church structure, which enjoys a sovereign status and has diplomatic relations with over 100 countries, the Holy See included.

The posters in every corner of Rome are questioning now ‘Where’s your mercy?’ referencing the ‘decapitation’ of the Knights of Malta. This decision caused a conservative criticism, which has intensified during this weekend. People didn’t understand the Pope’s action against Pope Francis Cardinal Raymond Burke’s marginalisation as well as other anti-conservative actions.

The posters in Rome appeared everywhere just in hours, probably, they were prepared before. According to the critics, Pope is ignoring cardinals and intervening with the sovereign group. The conservative critics are promoting their opinion through blogs, interviews and conferences as well.

Pope Francis gave no comment or response to the critics, though he has made it clear he favours case-by-case allowances.