15 : 56
The United States intercepted a fishing boat loaded with ammunition bound for Yemen.
09 : 36
A passenger on a cruise ship bound for Argentina was killed by a wave.
09 : 35
Britain pounced on von der Leyen for one phrase about Ukraine.
09 : 33
In Greece, a train with American tanks derailed.
09 : 30
Hungary hosted consultations on anti-Russian sanctions.
20 : 37
Biden’s position on Ukraine has not changed, the White House said.
More news 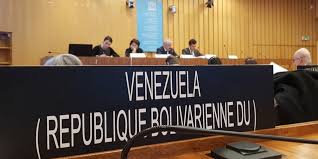 Jorge Valero made on Tuesday the report to UNESCO, in which he mentioned the negative consequences of the US blockade and the economic war in current issues.

The Venezuelan diplomat claimed that US sanctions have a negative impact on the Andean country. In particular, it the purchase of vaccines to fight the coronavirus, despite the UN calls to facilitate Washington’s work in times of the covid.

In his address to UNESCO, Valero also denounced the consequences of US unilateral coercive measures against his country in the educational, scientific and cultural sectors. Commenting on these issues, the veteran diplomat stated that The White House’s aggressiveness prevents Venezuela from fully deploying its programs to guarantee inclusive access to education, science and culture. For Venezuela, these are stable and unchanged priorities since the times of the Bolivarian Revolution and Hugo Chavez’s era (1954-2013).

‘Since our presentation of credentials to UNESCO Director-General Audrey Azoulay in late 2020, we have explained the situation created by the unilateral coercive actions and the urgency that they stop to be implemented,’ Valero said in Paris where the specialized UN body has its headquarter.

Despite the sanctions, the ambassador highlighted Venezuela’s resistance and its capability to continue to function as a nation facing sanctions that reduced tax revenues by 99 percent and seek to hit the oil industry, the country’s main profit sector, Prensa Latina reports.