Victoria Beckham celebrates her 44th birthday with her kids in California 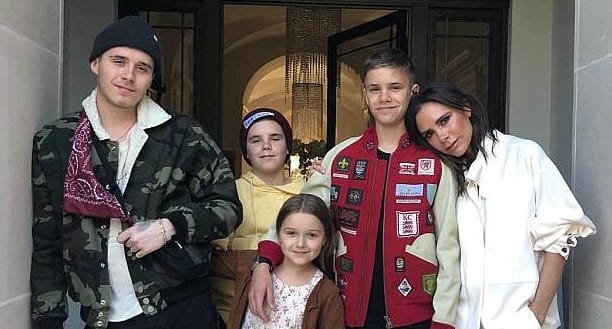 Victoria Beckham, designer, celebrity and lucky mother-of-four, turns 44 on Monday, she preferred to be in sunny California on her birthday. All her kids, of course, joined Vicky who was happy to share their photo with the followers on social media.

With her son Brooklyn studying in New York and her husband David jetting around the world for work, it’s not often Victoria Beckham has her whole family in one place. But the former Spice Girl celebrated being reunited with brood on the eve of her 44th birthday on April 16. Birthday girl shared an Instagram pic of kids Brooklyn, Romeo, Cruz, and Harper prior to posting a separate snap with husband David.

The celebrations come after the famous family enjoyed a spectacular day trip to Disneyland, where they enjoyed going on rides including Space Mountain and It’s a Small World, while Victoria tucked into “Disney carbs” at breakfast. The Beckhams have been in the US since the beginning of the Easter holidays, in both Miami and Los Angeles.

Brooklyn had flown from New York to spend time with his parents and younger siblings amid his split with on-off girlfriend Chloe Moretz.

Daring to impress, the fashion designer looked stunning in an all-white ensemble as she leaned her head on Romeo’s shoulder. The children looked to be following in their mother’s footsteps as they all looked like fledgeling fashionistas.

Soon-to-be-royal Meghan Markle has a great respect for style sense of Victoria Beckham, the actress even visited facialist Sarah Chapman on VB’s recommendation. With Vicky’s help, Prince Harry’s fiancee was even able to get around the six-week waiting list in time for her engagement announcement. Though it’s hard to imagine anyone not scrambling to accommodate a future duchess.

Then Meghan wore a Victoria Beckham white cashmere sweater in some of her engagement photos with Prince Harry in December. After wearing the sweater it sold out almost immediately, which is a fact that might give a cynic pause about the motivation behind this new friendship. Not to mention, this “friend” of Beckham’s decision to leak it to Vanity Fair. Is this just about giving Beckham’s business a boost?