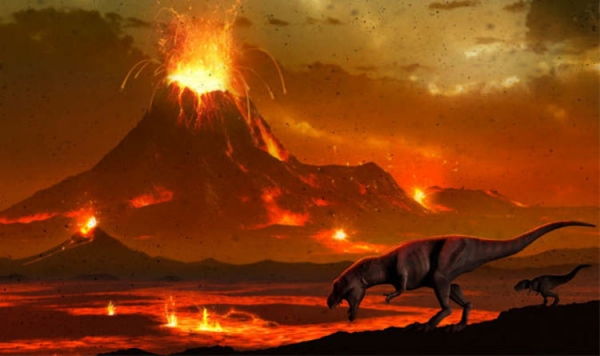 The climate change in the Triassic period was caused by the massive carbon dioxide released into the atmosphere from the volcanic eruptions, the researchers said. It is comparable to the amount of CO2 expected to be produced by all human activity nowadays.

A new study shows that intensive volcanic activity played a key role in triggering extreme climate change 201 million years ago, during the last phase of the Triassic period. Too many CO2 in the air caused the warming climate and wiped out almost half of all existing species.

Tiny gas exsolution bubbles were thoroughly analyzed by the international team of researchers. Fortunately, the small particles preserved well within the rocks, and showed that the number of CO2 emissions released in a single eruption – comparable to 100,000 cubic km of lava spewed over 500 years – is likely equivalent to the total produced by all human activity during the 21st century. In other terms, they are assuming a 2C rise in global temperature above pre-industrial levels.

According to Professor of earth and planetary sciences Don Baker, the end-Triassic environmental changes driven by volcanic CO2 emissions may have been similar to those predicted for the near future. In an article for journal Nature Communications, the researchers suppose that volcanic activity contributed to the devastating climate change believed to cause the mass extinction.

According to Professor Don Baker, the researchers cannot precisely determine the total amount of carbon dioxide released into the atmosphere when these volcanoes erupted in the Triassic-end period. Thus, the correlation between this natural injection of CO2 and the end-Triassic extinction should be a warning to us.

«Even a slight possibility that the carbon dioxide we are now putting into the atmosphere could cause a major extinction event is enough to make me worried,” says Professor Don Baker.