Why are strikes so rare in Switzerland 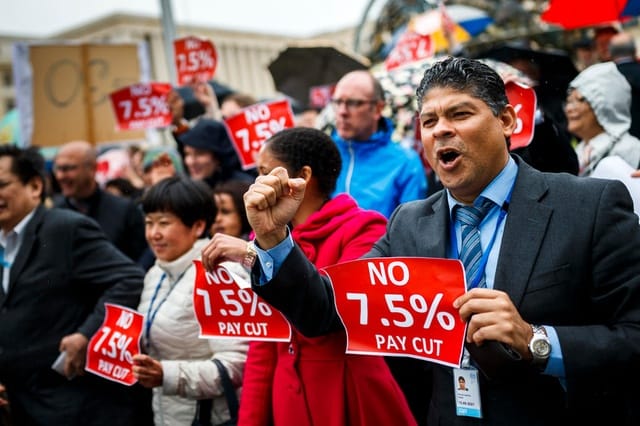 Despite the Swiss trade unions have warned that strikes could continue and announced that the autumn is going to be heated, the strikes are relatively rare in his European country. In 2017, the Hans Böckler Stiftung published research showing that Switzerland lost only two working days per 1,000 workers to strikes between 2005 and 2015.

Switzerland’s construction workers are going to strike to increase their retirement age, the official announcement informs that the meetings will take place on Monday in Ticino and then Tuesday and Wednesday in Geneva.

In comparison with 12 other European countries (plus Canada and the US), Switzerland lost the joint lowest number of days per 1,000 workers, equal with Austria. Top of the list was France (123 days) and Denmark (122). The experts say that such a low number of strikes could be explained with the long tradition of avoiding industrial conflict through negotiations.

In Switzerland, many sectors are governed by collective bargaining agreements which set rather flexible conditions for employees. For this country, a compromise is important, even in politics. No need to forget that Swiss people used to voice their opinions through regular referendums reduces the potential for conflict in the workplace.

History of strikes in Switzerland

During the last century, Switzerland has been faced many strikes, the most significant took place in November 1918. The small but disciplined country was paralysed by a three-day general strike involving 250,000 people. The second wave of strikes in Switzerland was registered in the inter-war years but then virtually disappeared after 1945.

Despite the low number of strikes, Swiss workers and trade unions are still continuing to announce the strikes. In 2008 and 2014, the country was involved into two mass strikes since the Second World War (the Swiss Federal Railways workshop in Bellinzona and a strike of Geneva public transport employees respectively). This year, Geneva United Nations HQ’s employees spent one day, striking and protesting over pay cuts.

According to the trade unions argue the increase is because the Swiss culture of social partnership has broken down. That is why Swiss workers are going to use their right to strike, which was enshrined in the constitution in 1999. According to the Swiss Association of Trade Unions (SGV),  20.3% of Swiss citizens are members of the different trade unions. The figure is rather low in comparison with other EU countries (92% in Iceland, 67% in Sweden) but proportionable to Germany, Australia and Japan (all around 17%).