Wildfires in Greece: State of emergency as air turns orange 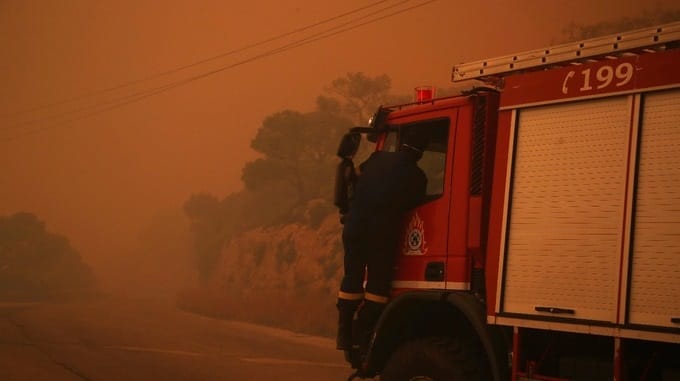 Wildfires made Greece’s government announced a state of emergency, more than 20 people are confirmed dead and 56 injured, 11 of them seriously, Reuters said. Greece has asked for help from the EU, Cyprus and Spain have immediately offered a substantial and timely assistance.

Greece’s government spokesman Dimitris Tzanakopoulos confirmed that the death toll had risen to 20 early on Tuesday. The most terrible thing is all victims had been trapped in the seaside resort of Mati,  east of Athens, and died either in their homes or their cars. The firefighters and medical staff from Spain and Cyprus immediately arrived in Greece after country’s ask for assistance.

One fire is burning northeast of Athens in the Penteli area, where at least six people were taken to hospital after suffering burns, said fire service spokeswoman Stavroula Malliri.

Dramatic video posted on social media showed damaged buildings, orange smoke-filled skies, and people fleeing the fires by car. According to the local residents, the air turns orange from the wildfires.

The second major fire broke out on Monday afternoon in the Penteli area northeast of Athens.  Local authorities said they were evacuating children’s summer camps, while dozens of homes and cars were reportedly destroyed.

More than 600 firefighters and 300 vehicles are involved in fighting the fires and Greece have asked for help from the European Union countries. Cyprus and Spain have already offered assistance.

The thick smoke from the fires has led to main highways being shut down, while an orange haze has settled on Athens.