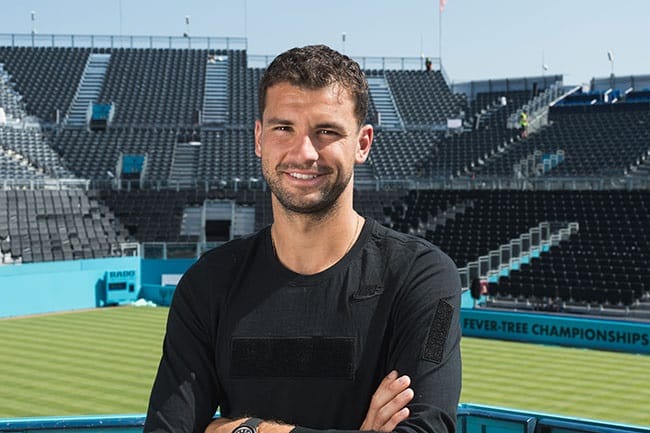 Grigor Dimitrov is known not only as an ex-boyfriend of Maria Sharapova, he is a tennis star who suggests that Romeo Beckham is a very talented athlete, Hello! reported.

David Beckham’s son Romeo is going to be a serious tennis player, according to an ace Grigor Dimitrov. The Bulgarian tennis player has been entrusted to be a coach for Romeo whenever he visits the UK. Grigor who is ATP’s world No 6 now, highly appreciated Beckhams’ generosity and said he is “honoured” to train the 15-year-old teen when tennis star is in London.

Dimitrov confessed that London is an amazing city, and every time he is over there, he tries to train with Romeo Beckham. That is definitely the best part of Grigor’s staying in the UK’s capital. Dimitrov and Beckhams know each other for a long time, so, David and Victoria have also been very understanding, they always ask Grigor about Romeo’s skills and perspectives.

Grigor’s friendship with the Beckham family is no surprise. Last year, Romeo shared a series of videos on his Instagram page of their training sessions. Of his ambition, Grigor revealed to Hello! magazine:

“When he asks me questions about tennis, I can answer them – that’s the easiest thing that I can do for him.”

The tennis ace who is set to take on Novak Djokovic in the Queen’s Club Championships on Thursday, believes that Romeo is not only a big tennis fan, he is a pretty talented teen.

“So if he keeps on going the same way, he will go far. He’s very dedicated, I’m always going to support that kind of behaviour. If you want to pursue that, you have to pursue it to the end.”

Asked if they have seen each other since his return to London, Wimbledon star said he hasn’t seen Beckhams yet because of schedules are pretty busy.

“I have been practicing pretty much every single day. Plus they are busy with stuff, it’s all about the right timing. I’m sure in the coming weeks, we’ll sort something out,”