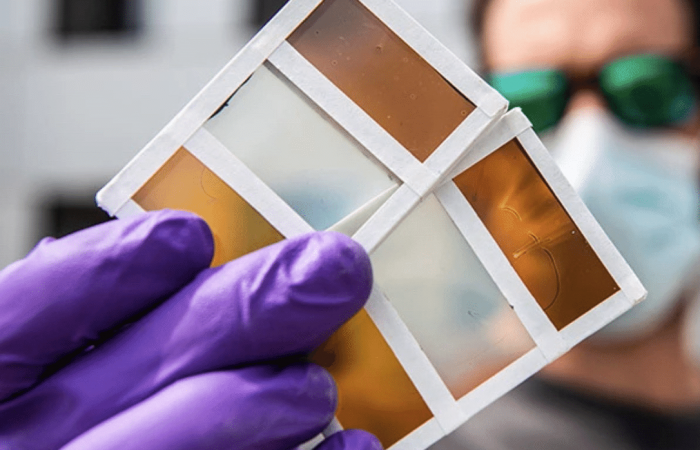 The innovative thermochromic photovoltaic windows (TPW) will definitely make a positive impact on the environment, said the researchers from the US Department of Energy’s National Renewable Energy Laboratory (NREL). They developed windows chameleons that can switch colours when heated by sunlight to keep buildings cool.

Perovskite-based windows chameleons are acting as solar panels when they heating, Springwise has learned. That approach would help to fight against climate warming. Besides, TPW reduces the need for air conditioning and also providing an alternative source of energy.

The NREL engineers have combined in their study two technologies, developing windows that automatically change colour when heated and act as solar panels as well. Such double tech can block glare and reduce the need for cooling, while also accumulating the green energy from the light that can transform in for electricity.

The emerging solar cell material perovskite has opened a new era in technologies. When the glass reaches temperatures between 35 and 46 C, the vapour causes the perovskite crystals to rearrange themselves into different shapes, each one changing the colour of the glass in about seven seconds.

Changing from yellow, orange, red and brown, each colour blocks light to different degrees and cools the room down in the process. According to the preliminary plans, the first TPW sample could be presented by the end of 2021.

In the light of the warming climate, the idea of TPW will definitely receive further development. While the planet battling warmer temperatures, the windows chameleons should help to keep the environment healthy.