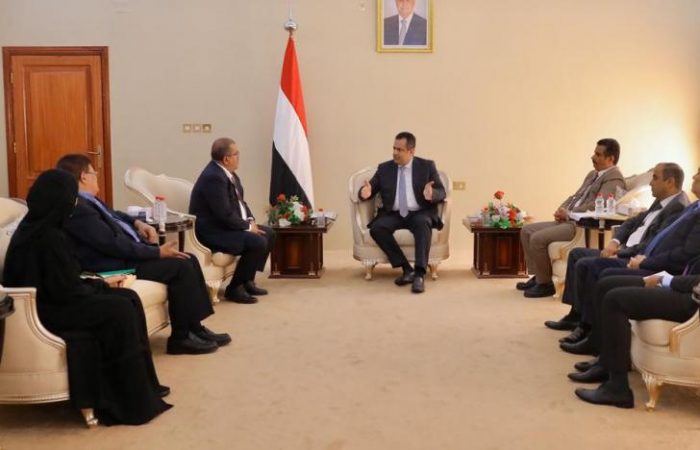 Yemen’s prime minister Maeen Abdulmalik said that economic steps taken by the government under the directives and support of President Abdrabbuh Mansur Hadi aim to improve the living conditions of the people and to help normalize the situation in liberated areas of Yemen.

PM and ministers of finance, oil and electricity have discussed this week the perspectives of developing the energy sector. On Thursday, several proposals and perspectives to revitalize the Aden Refinery to import the local market’s need of fuel were made.

The Riyadh Agreement was signed last month in the Saudi capital, according to its paras, the Yemeni legitimate government has taken a series of measures to improve the living conditions of citizens.

The measures include finding a new mechanism to break the monopoly of the imports of oil derivatives with an aim to provide fuel at the lowest possible prices.

This week, Cabinet emphasized the importance of local companies participating in tenders along with international firms to allow for more competition.

“In light of the Riyadh Agreement, the current stage should appease the people by offering them hope on a new beginning,” the PM said, according to official sources.

Abdulmalik’s government said its top priority in the period ahead is to pay the salaries of the public sector and carry out security and military arrangements.

PM and his government ministers returned to Aden last month under a power-sharing deal with the Southern Transitional Council (STC).