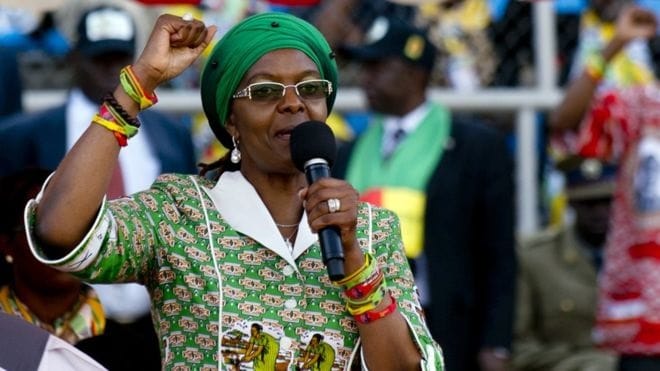 Grace Mugabe, the former Zimbabwe first lady, was put under house arrest with her husband when the army sent armoured vehicles and troops on the streets of Harare in November. The wife of Robert Mugabe is under investigation because of her PhD she obtained in 2014.

The former first lady Grace Mugabe is a smart woman, undoubtedly but her PhD degree looks odd to the academics, that’s why the state anti-corruption commission has launched a probe into the legitimacy of a doctorate awarded to Mrs Mugabe. In January, the commision official complained about Grace’s qualification that she obtained in 2014. There is a version that the PhD was awarded just as Grace Mugabe was displaying her political ambitions and rising through the ranks of the ruling Zanu-PF party.

In November, the military intervention that ended Mr Mugabe’s 37-year hold on power was triggered by his decision to sack Emmerson Mnangagwa, his then-deputy, who was locked in a bitter succession struggle with the first lady.

Zimbabwe’s new government has launched the probe into Mugabe’s doctorate is the first time that a member of the former presidential family has been officially implicated in corruption. The investigators suggest there could be limits to a deal by which the ex-leader guaranteed immunity from prosecution in return for him stepping down, according to Zanu-PF officials briefed on the agreement.

In fact, the former first lady was known as the fashionista, not an academical person who spends her time in the libraries. That is why the news about her fake doctorate degree wasn’t a surprise for Zimbabweans.