Zimbabwe’s president calls for end to US, EU sanctions 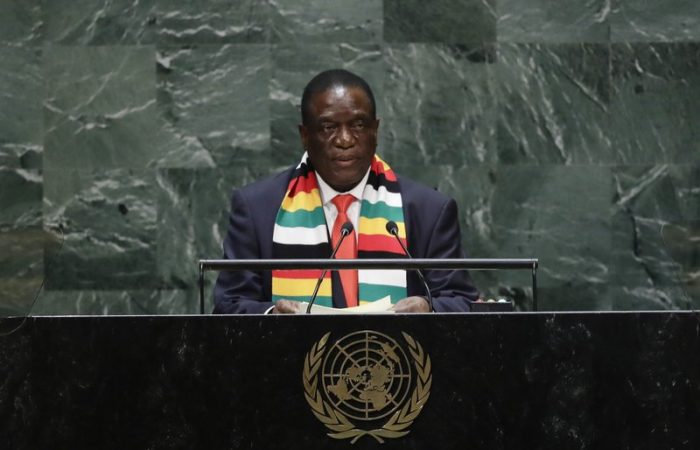 Zimbabwe’s leader Emmerson Mnangagwa said that the sanctions are slowing down the progress in his country. In his address in the UN General Assembly, he asked the US and the European Union to make a move and to lift sanctions, AP reports.

The 77-year-old Zimbabwean president told the UN that his government is making progress since April when the former ruler Robert Mugabe was ousted from power. According to Emmerson Mnangagwa, Zimbabwe is achieving a budget surplus through “fiscal austerity and discipline.”

Zimbabwe’s leader asked to ease the sanction against his country, taking into account Zimbabwe made some progress so fast. Mr Mnangagwa added his government had established “an open political platform” for all parties to debate economic and political reform. However, the US and EU sanctions are slowing progress in Zimbabwe.

The U.S. and the European Union imposed sanctions almost two decades ago over alleged rights abuses. However, during his address, Emmerson Mnangagwa had no mention of alleged political repression under his rule. More than 50 government critics and activists have been abducted in Zimbabwe this year, at times tortured and warned by suspected state security agents to stop anti-government actions.

Moreover, the strong-armed tactics as opposition to his government grows amid crippling inflation became the feature of Mnangagwa’s presidency. Under his ruling, debilitating water shortages and chronic power cuts became the common thing.

The sanctions slow down progress in Zimbabwe

Mnangagwa stressed that the economic sanctions are “slowing down progress” and “punishing the poorest and most vulnerable in our society.”

Mnangagwa who took over after Mugabe stepped down under military pressure, was declared the election winner. Meanwhile, the results of these elections seem to be a disputable question, the many observers believe.

“I urge the world to be patience with us support us and to join us on this new and exciting journey together,” Zimbabwe’s leader asked the United Nations.