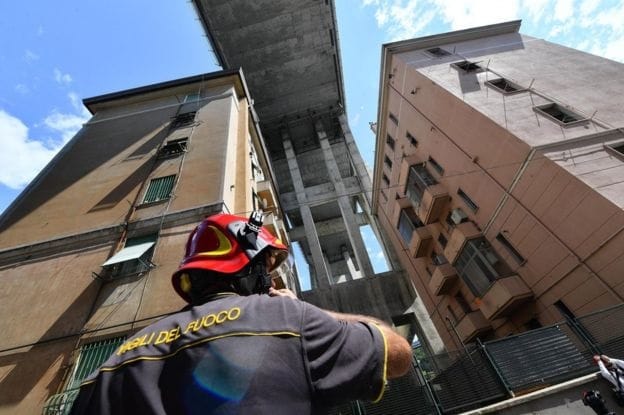 Genoa bridge collapse made the government demand that the bridge’s operator must rebuild it, SkyNews said. Saturday officially will be a national day of mourning, the sad date coincides with the funerals of victims.

Italy’s government in its statement demanded that company Autostrade must prove it carried out required work to ensure the proper functioning of the bridge and avoid accidents. If Autostrade is found to have breached its terms it can be fined up to 150 million euros.

The transport ministry added that it wants Autostrade per l’Italia to complete the rebuild within a limited period of time and pay to restore buildings and other areas damaged by the collapse. So far, people from the houses under the collapsed bridge are unable to return to their homes. Protecting Genoa people, the Italian government has opened an investigation into the toll-road operator following the collapse, which killed at least 38 people.

A company Atlantia, controlled by the Benetton family, owns around 88% of Italy’s biggest toll-road concessionary. After collapsing Genoa bridge, Atlantia shares have drastically fallen by as much as 25%, the threats of government retaliation have dumped the stock.

According to the Deputy PM Luigi Di Maio, the state would have to take over the country’s motorways if concession-holders could not do the job properly. As well as claiming at least 38 lives, the Morandi bridge collapse left 15 badly injured, while at least seven have been pulled from the rubble alive.

«It’s not possible that someone pays a toll to die. Those who were supposed to do the maintenance work did not do it properly. That bridge should have been closed before this tragedy happened,»

In Genoa, hundreds of people cannot return to their homes, particularly residents of council housing blocks that could be at risk from the collapse of another tower. The blocks may have to be destroyed when a new bridge is built. The governmental investigation should find out the cause of the Morandi bridge collapse, so far, it is not yet clear. One of the versions is the torrential rainfall at the time.