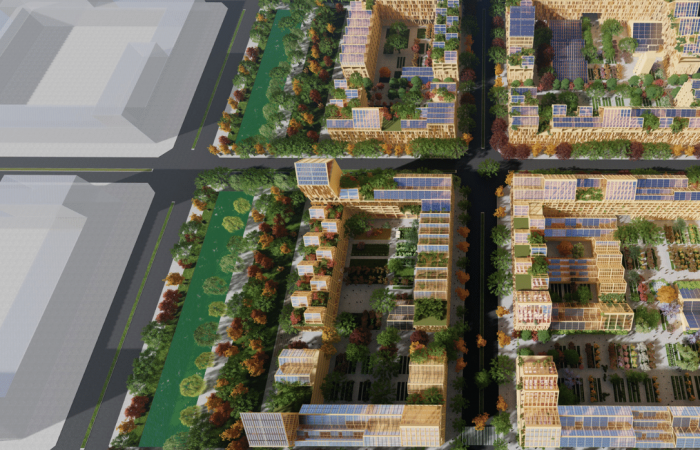 The architecture company from Spain has invented the concept city, which protects the local residents from epidemics. The Springiwse says, the project’s size – at just four blocks square – allows people to both share and communicate more easily. The so-called Self-Sufficient City design recently won a competition in Hebei province, China, to design a new urban concept.

The new concept of the city was presented by the Barcelona-based Guallart Architects last week. The idea is four blocks square that is creating not only a sustainable space but a sustainable lifestyle has proposed a self-sufficient city designed to help people get through extended lockdowns.

According to the architects, the fresh concept city could help people to weather the next outbreak of the virus. One of the Chinese provinces believes that the winning entry would be able to produce its own energy and food.

The Guallart team that developed the design were all working from home during Spain’s coronavirus lockdown, and they included aspects they thought would make our lives better in the situation.

The idea of Self-Sufficient City: what inside?

One important aspect of the design was the realisation of the importance of creating a nature-friendly environment, with birdboxes, shelves for swallows, green roofs and orchards planted with butterfly-friendly flowers on every building.

First of all, The Self-Sufficient City was designed to allow rainwater runoff from streets to be collected for reuse, and with green areas that have sufficient soil depth for planting vegetables – as well as everything a community needs to develop a thriving circular economy.

In order to create a new urban life, the idea of buildings should be based on the circular bio-economy, that will empower cities and communities. The concept includes greenhouses on many of the buildings for growing food and small-scale “co-working digital factories” that would use 3D-printing and rapid prototyping to supply replacements for missing or broken items in the event of supply chain disruption.

According to Guallart Architects, the development would offer a mix of apartments, shops and offices, all designed to accommodate multigenerational living.

Inside the new urban blocks, every household would have access to their own outdoor space and would come with space for remote working and 5G connectivity. Solar panels on sloping roofs would provide electricity and streets would be prioritised for pedestrians, cyclists and electric taxis, while drones would be used for deliveries.

This type of sustainable design could not only help communities to get through pandemics, but to manage all types of natural disasters, including weather events caused by global warming.

EgyptAir to operate 83 flights on Friday