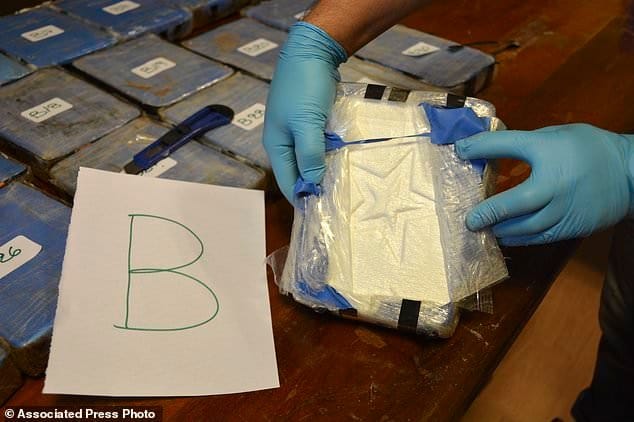 In Argentina, Victor Koronelli, the Russian ambassador, and three members of the Russian federal security service reported to Security Minister Patricia Bullrich that they had suspicions about the diplomatic luggage found at a school that is annexed to the embassy. The checking the luggage has resulted in the seizure of nearly 400 kg of cocaine, Japan Times reported.

Buenos Aires police seized nearly 400kg of the drug from diplomatic luggage, a sting police operation replaced the drugs with flour and added tracking devices. The operation has led to arrests in Argentina and Russia, Argentinian officials said on Thursday. Russian security services had helped in the investigation and one of those arrested in Argentina was a serving police officer in Buenos Aires, she said.

According to the Argentine Security Minister Patricia Bullrich, the cocaine found in the Buenos Aires embassy was worth 50 million euros and was of very high purity. The ‘luggage’ was destined for Russia and probably also Germany.

Ms Bullrich added that the alleged mastermind of the smuggling operation was in Germany and she expected this person to be arrested by German police. Two people have so far been arrested in Argentina and three in Russia.

Once authorities confirmed that there were drugs inside the 16 pieces of luggage, they devised a plan to catch the criminals: They swapped cocaine for flour and placed a GPS to track the luggage.

“This has been one of the most complex and extravagant drug-dealing operations that Argentina has faced”,

“At 3 a.m. we had to send people from the border police to buy the 389 kilograms of wheat to the central market (in Buenos Aires) because no one had 389 kilograms in a warehouse,”

“The drugs never traveled to Russia. Only the flour traveled.”

The luggage was flown to Russia in 2017. Bullrich said three Argentine customs officials travelled to Russia to monitor the delivery, and that Ishtimir Khudzhmov and Vladimir Kalmykov, were arrested when they went to pick up the cargo.