Austria’s Kurz has task of putting together new government 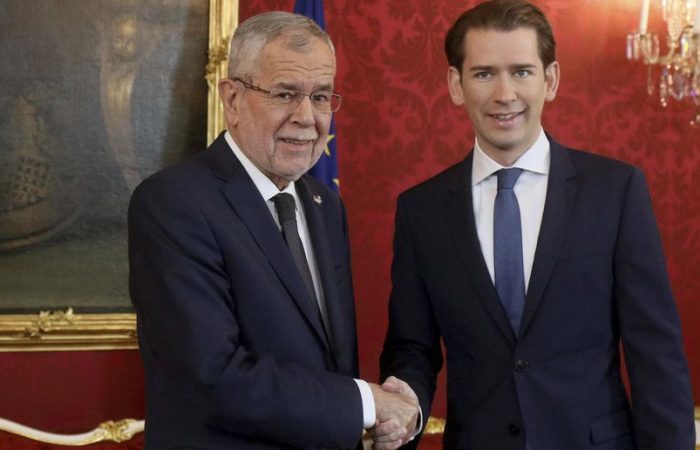 After the federal elections, Sebastian Kurz, head of the Austrian People’s Party (ÖVP) met with President Van der Bellen to hold the talks at the Hofburg palace in Vienna where Mr Kurz will get the order to form a new Cabinet.

Austria has started a new phase in its political life, the national leader welcomed the winner, a centre-right leader Sebastian Kurz and congratulated him after OVP emerged as the strongest by far from an election a week ago.

The lengthy process of putting together a new governing coalition has started on Monday. For the 33-year-old Kurz, that task will be a real challenge, the observers suggest. Austria’s political climate has changed a lot during just a couple of months.

Meanwhile, until a new administration is ready to show its readiness, the non-partisan interim government of Chancellor Brigitte Bierlein will remain in place. Her office was installed after a scandal surrounding the far-right Freedom Party brought down Kurz’s previous government in May.

After the parliamentary elections in Austria on Sep 29, politics definitely should turn Green. The victory of the Greens party makes Sebastian Kurz’s job even more complex.

On September 29 elections, Sebastian Kurz, Austria’s 33-year-old former chancellor and head of the conservative People‘s Party (ÖVP) benefited most of all and won over 37% of the vote. The Social Democrats (SPÖ) as the second-largest party dropped from 27% to a historic low of 22%.

In fact, the Social Dems (SPÖ) could become a familiar and unloved combination that has frequently run Austria or it can ally with the resurgent Greens.

At the same time, the prognosis is rather optimistic due to the existing cooperation between the ÖVP and the Greens in western Austria. The Green politicians known as pragmatic, they are leading the way there, according to EU ex-Commissioner Franz Fischler.