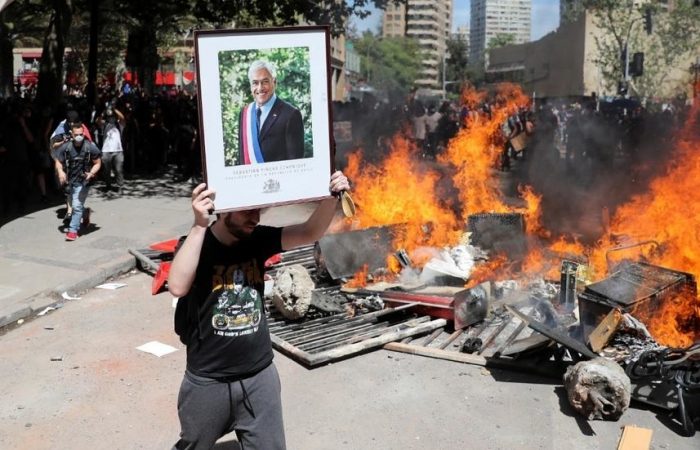 Chile has to cancel two summits scheduled to take place in December in the capital. President Sebastián Pinera has pulled out of hosting a major United Nations COP25 and APEC amid the continuing anti-government protests in Santiago.

The UN climate change conference, known as COP25, was planned to be held next month in the Chilean capital. According to the presidential announcement, the decision to cancel two important summits had “caused him a lot of pain” but that his government needed “to prioritise re-establishing public order”.

APEC summit was expected to draw the US and Chinese presidents, however, the issue of the high-ranking participants’ security made the Cabinet review the decision to host the conference in Santiago.

The civil unrest resulted in killing at least 20 people in the Chilean capital. Protests in the Latin American country continue even after Sebastian Pinera appointed a new cabinet and announced social reforms. While the mass protests continue, the authorities don’t budge on the protesters’ main demand.

The activists and protests organizers have shown little sign of abating despite President Pinera announcing measures to ease Chileans’ discontent with high levels of inequality and other grievances.

Chileans demand their president to resign

People on the streets used to gather near the La Moneda government palace, beating pots and drums and chanting their main demand, Pinera’s resignation.

Santiago, the Chilean capital looks really not suitable for hosting the international conferences because of a cloud of smoke lying over the city. The air smells of burnt plastic and tyres. Barricades, a fast-food restaurant and several subway stations have gone up in flames across the city.

More than a week after the outbreak of mass protests against social inequality in the country, the people are making their anger known once again.

According to the protesters, Chilean people are fed up with the abuse of power by the government. While one percent of the society has the most money and therefore the most power, the common citizens couldn’t return to normality, they haven’t achieved anything yet.