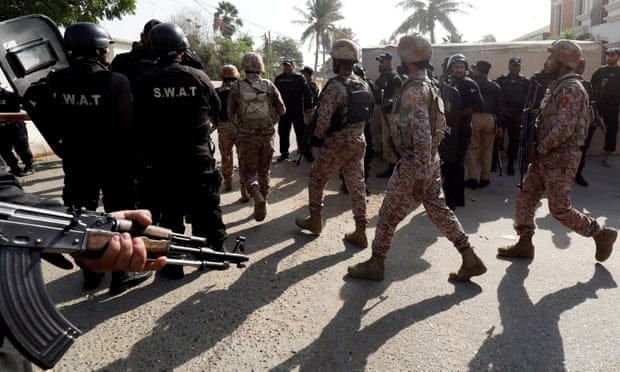 China consulate was attacked on Friday morning, according to the local media. The terrorists stormed the consulate shortly after 9 am, they opened fire at guards and threw grenades, then managed to breach the main gate and enter the building.

Five people died after the awful attack in Karachi, two police officers and all three assailants, said Mohammad Ashfaq, a local police chief.  The Balochistan Liberation Army claimed the responsibility for morning attack: “We have been seeing the Chinese as an oppressor, along with Pakistani forces,” a spokesman for the terroristic cell told the press. The construction projects and Chinese workers in Balochistan have been repeatedly targeted by rebels but this is one of the most prominent such attacks to date, say the observers.

None from consulate staff was hurt, all Chinese diplomats were safe and unharmed during the attack and the shootout, Ameer Ahmad Sheikh, a senior police official, confirmed during the press conference. Karachi, Pakistan’s largest city, was for years rife with political, sectarian and ethnic militancy- all these factors bring no peace or safety to the residents.

Imran Khan, a new prime minister, condemned the attack, describing it as part of a conspiracy against Pakistan and China’s tight cooperation. Khan lauded the Karachi police and rangers, saying they showed exceptional courage in defending the consulate and the “nation salutes the martyrs”. PM ordered an investigation and vowed that such incidents would never be able to undermine relations with China, which are “mightier than the Himalayas and deeper than the Arabian Sea”.